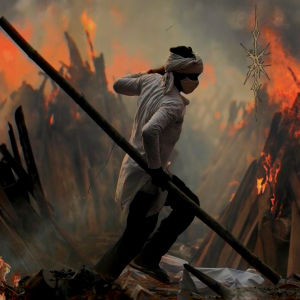 On the cover, an Indian superhero races through a raging apocalypse.  The world is burning, its traditions thrown on the pyre.  Kush Arora (Only Now) has been challenging conventions for years, and now on Indian Unclassical Volume 1 he invites a wide host of stellar collaborators to contribute raw fuel: Robin Sukhadia (tabla), Sheela Bringi (Bansuri), Kamaljeet Ahuwahlia (santor) and Rajib Karmakar (sitar).  Their presence marks the album as thoroughly authentic, while Arora makes it modern.  His dissections and reconstructions of raga and other traditions are powerful enough to suggest a new subgenre, as yet unnamed.

The set kicks off with a huge, THX-style bass note, an immediate indication that we have veered far from the mainstream; as Only Now puts it, Unclassical.  “Time Suffocation” grows from a drone and is decorated by tabla and santoor, which kick into high gear following the first of many electronic swooshes.  The suffocation of the title may refer to the claustrophobic sections of the work, but moments of clarity surface throughout.  There’s no break on “Slit Ties,” where tabla is used as an assault weapon.  Disorienting sheets of distortion travel speaker-to-speaker in “Glory,” suggesting a monsoon through which Bansuri flute plays a spectral dirge.  The apocalypse now seems imminent.

Things calm down in the second half, a relief after all the pummeling.  There’s only so long the mind can remain on high alert.  The more reflective aspects of traditional Indian music begin to surface through the drones.  Track titles “Inverted Memories” and “Ghosts of Regret” indicate a wistful inventory.  Through it all there’s a sense that something exciting is happening, old forms giving way to new, the forest burned to make mulch for new seeds.  The ten-minute closing track, “Last Gasp,” unfolds in a haze, a bell tolling in memory of a bygone era.  While the artist might have sequenced the set in reverse, the gradual comedown is a fitting elegy.  (Richard Allen)

50% of the proceeds for this release will go to Manav Sadhna for their work strengthening underpriveleged communities in Ahmedabad:  manavsadhna.org