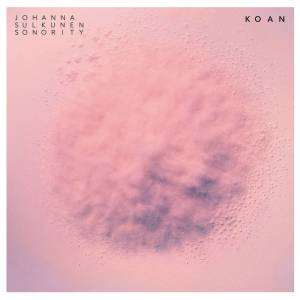 When a new album contains tracks titled “VIII” to “XIV,” it’s clear that some component is missing.  And so Terra sent us back to last year’s Koan to experience the Sonority project in its entirety.  There’s still one installment left in Johanna Elina Sulkunen‘s trilogy, but these two deserve the chance to be heard as one.  Playing them back to back, their transition point is obscured, dissolved in a miasma of mutating sound.

As might be gleaned from the title, Koan offers an immersion in the tenets of Zen Buddhism.  Far from being an ambient affair, the set is incredibly active, incorporating the sounds of koans ~ fragments, phonemes and field recordings from the temples.  What at first seems like words struggling to emerge becomes syllables as spiritual practice: repetitions accompanied by soaring choral notes.  “The Flaming Tile” sets the stage for a series of surprises.  Nothing is staid; all remains in motion.  Nor is the album content in placidity.  Breath falls like bombs in the pointedly titled “Speaking Too Much” before everything evaporates.  When the effervescence gives way, the returning sound is the same, but the soul has been changed.

By “Shosen,” syllables have reverted to letters: zzz, eee, ooo, lip pops, baby-like cries, an adventure in onomatopoeia.  Sulkunen reflects on the koans by creating koans of her own.  What is the sound of one lip speaking?  “Perfection” starts like a rainstick but grows computerized and unruly, leading one to reflect on the title.  Is the imprecise “perfection” of humans better than the soulless, clinical perfection of machines?  “Abide,” the hinge between albums, seems to support the former.

Sulkunen had a different plan for Terra, derailed by the pandemic.  Instead of traveling to Iceland, she was “trapped in Copenhagen” ~ a fate that many would consider a boon.  Reflecting on the state of the world and on humanity’s poor relationship with the earth, she expanded her fragments into occasional lyrics.  To further her vision, the composer recruited a string quartet, brass and drums, while expanding her fragments into occasional lyrics.

The gorgeous “Layers” rises naturally from the conclusion of “Abide,” easing ever so gently into the orchestral realm.  By the end of the piece, the cause seems even more urgent, the need for action more immediate.  “Soil” is the sound of seeds struggling to reach the surface, truth struggling to reach minds.  Sulkunen sings clearly for the first time, even as the instrumentation falls apart around her, a metaphor for Terra’s condition.  The sullen screams of the subsequent piece howl like fierce wind.  In alliance, the cover art is simultaneously arid and lush, suggesting a pair of diverging futures.

“Human Antitouch” is another highlight, a vocal lament whose title suggests the yearning of the past year.  In this context, “Counting of Days” may refer to the days on a calendar during lockdown or the days before a climate apocalypse.  Shall we emerge from our cocoons only to burn down the forest?  Zen Buddhism may be active, but does it ever turn angry?

Relenting ever-so-slightly, the composer allows first sorrow, and then beauty to emerge, appealing to the aesthetic.  The great earth has always been deep black … I have broken …  The subject of the verb lies as undefined as the future.  Fleshing out an earlier idea, she intones, in the mountains, there’s no counting of days.  Into what might this symphony evolve?  Is a koan ever complete?  (Richard Allen)