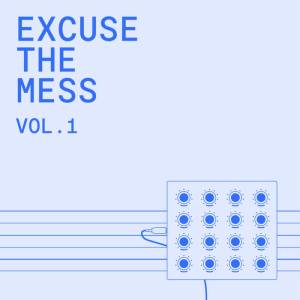 It’s a podcast!  It’s an album!  It’s a podcast AND an album!  No, wait, TWO albums! Update: two albums and two books!  On the excuse the mess podcast, host Ben Corrigan invites performers to collaborate on an instantly generated track.  The rules: 1) Do not expose them to bright sunlight; 2) Do not get them wet; and 3) Do not feed them after midnight.  *checks notes* Correction: 1) No preplanning; 2) The track must be completed the same day; 3) Only one instrument can be used as a sound source, but it can be manipulated by electronic means.  And off we go!

It’s no surprise that Manu Delago chooses the hang, his favorite instrument.  The artist is no stranger to unusual methods of creation, considering he once hiked into the Alps with a troupe of musicians to record an album in the snow.  “collider” grows more percussive as it develops, emerging as a fully-fledged piece, a mild surprise that opens the door for the appreciation of the series.  Other weapons chosen for Volume 1: trumpet, harp, viola, sax, voice, ice rink, piano and guitar.  Which of these is not like the other?  Yes, let’s jump right to Mira Calix and “skating on thin ice.”  Calix brought the entire ice rink into the studio, which was a real pain because they had to record quickly before the rink flooded and destroyed all the equipment.  Then of course they had to get it back before it was reported missing by the Tower of London.  It seems like the skaters and the Zamboni were brought in as well, producing one of the podcast’s best and most expensive collaborations.  But the whole series is fun; one can hear the exuberance of the performers, freed from hours of molding music to fit label expectations, second-guessing their own instincts and revising until all spontaneity is lost.  Laura Jurd is positively ebullient, beginning with tentative trumpet that turns into a parade.  Robert Ames attacks his viola while Corrigan transforms wooden taps into drum beats.

Then to Volume 2, which includes an even more diverse set of sound choices: vinyl, music box, violin, Casio, toy piano, sample library, cello,, pesto jar.  Wait, what, pesto jar?  Let’s go there.  Anna Meredith’s “oopsloops” makes one curious about kitchens and their supplies.  Hopefully somebody ate the pesto.  The track is nearly a dance track ~ not as much as Gold Panda’s piece, but close.  The tempo increases like pangs of hunger.  Hannah Peel’s piece is so accomplished, we can’t believe it was composed on the spot, just like we can’t believe Parkay isn’t butter.  Credit the talent of the artists, and Corrigan for encouraging them to produce such beguiling toddlers.

For interviews, photos and behind-the-scenes stories, be sure to get the books.  They may inspire you to make music of their own.  It’s easy!  It’s fun!  There’s no one to please but yourself!  Even the humblest of household instruments can become the basis of a catchy track.  And be sure to check the podcast to learn where this happy mess originated.  No excusing needed!  (Richard Allen)