SP* Episode 22: SHUT UP AND LISTEN! – with The World According to Sound [podcast]

We kick off season 3 with an interview with the creators behind The World According To Sound, in honor of their 2022 Winter Listening Series. A streaming concert series designed for our times, each event is dedicated to listening closely together, apart. If, like us, you’re apprehensive about attending live concerts again, but miss the experience of collective listening, this series is made for you. 12 shows will be presented every Thursday evening at 6PM PST, January 6 through March 24, 2022. Enter “ACloserListen” at checkout for 25% off tickets and season passes. Half season passes, as well as individual tickets, are also available. This episode begins by profiling The World According to Sound and diving into their listening series, as well as their frustrations with the state of public radio in the USA. Despite these critiques, we all still have a deep love of radio, and so the back half of the episode forms an homage to the radiophonic arts.

Episode 22: SHUT UP AND LISTEN!

Sound Propositions should be available wherever you get your podcasts, so please keep an eye out and subscribe (and rate and review, it helps others who might be interested find us). You can support Sound Propositions on Patreon if you are so inclined, or send a one-time donation via PayPal. I’m very grateful for any support, which will help ensure future episodes. Supporting the podcast on Patreon grants access to vocal-free versions of the episodes, as well as other benefits for higher tiers of support, including custom made mixes, soundscapes, collages, and other custom projects.

Interview recorded between California and Montreal, December 2021
Produced and mixed in Montreal, January 2022

All 12 shows are sure to be of interest to our readers. The Winter Listening series began by delving into myriad sonic archives, exploring  the history of sound, the experience of isolation, time, transposition and travel in sound. Just this week, the latest installment explored the influences behind the Kronos Quartet, with violinist and founder David Harrington. Future events will explore bird recordings with BirdNote, the sounds of bodies with Jacob Kirkegaard, a career retrospective with sound art pioneer Bill Fontana, the history of radical radio documentary, and the experience of solitude. The series concludes with the sounds of the legendary Firesign Theatre, including a Q&A with members Philip Proctor and David Ossman.

The only “pure music” show in the series comes from Matmos, but fans of the duo know to expect a wide array of unusual sound sources. M. C. (Martin) Schmidt and Drew Daniel’s 2020 triple album was one of our favorites of 2020. That album is offered both as 44 individual tracks and as three hour-long mixes, one per disc, emphasizing the importance of continuous listening and dedicated attention. The Winter Listening Series provides the conditions for just such an experience, and we cannot wait to hear what the group has prepared. On March 17, Matmos will present a new work created specifically for the World According to Sound, with a Q&A with Martin and Drew to follow.

The World According To Sound

The World According To Sound (WatS) began in 2015 as a podcast by Chris Hoff and Sam Harnett, two public radio producers looking to get outside of the public radio aesthetic. The pair began producing abstract spots for radio, appearing on NPR’s All Things Considered and other radio programs. The podcast showcases a range of sounds, each episode a short and easily digestible presentation of an individual sonic experience, absent any public radio narration. The series began as 90-second vignettes, and while the length has grown a bit over what is now 130+ installments, the series still runs shorter than your average pop song. As someone who produces hour-long episodes of my own show, the brevity of WatS remains one of my favorite aspects of what Chris and Sam do.

But the duo quickly outgrew the podcast format, and have shifted their attention to organized listening, initially with 8-channel live events, and more recently with the streaming Listening Series. At their live events, audience members are given blindfolds to encourage more focused attention, and ticket-holders to the streaming Listening Series are mailed blindfolds to encourage the same at home. In mandating a collective listening experience, the pair have ironically returned to the origins of radio. Radio has a long history as an alternative to the concert stage, so there’s something very fitting about a concert series designed by radio producers. The pandemic has created just the right conditions for a return to such listening.

Read the complete program, and hear excerpts, at The World According to Sound.

A recurring theme in our conversation is the frustrations that the duo have with public radio. The rampant commercialization of the past decades has standardized the form, stifling creativity. Public radio has long been a site of experimentation with sound, given that radio is an audio medium. Marshall McLuhan gives radio as an example of what he called “hot” media, or media that emphasize one sense in high definition, requiring little audience participation. In the early decades of radio, before the advent of television, this was particularly true. As audiences fragmented to other media, some producers, often working in public, university, or community radio, were again able to push that level of experimentation. But as radio has been one of the dominant forces shaping the emergence of podcasting, the commercial advertising model has slowly slipped in public radio as well.

While many American cities have had public broadcasters since the 1920s (WNYC was founded in 1922), National Public Radio wasn’t established until 1971. This is of course unusual compared with other countries, where broadcasting receives public funding and is at somewhat more of an arm’s length from the forces of the commercial market. This is for better and worse, and the results of up for debate. Often this translates towards state-sanction of outmoded classical cultural ideals rooted in the old hierarchies of taste, but just as often it has meant economic support for artists doing groundbreaking and experimental work. And so in Europe, for instance, one finds a tradition of radio plays, Hörspiel, and radiophonic experimentation and radio art that has no analogue in the United States.

During the 1980s, as with other media, the commercial radio market in the US went from widespread and diverse to consolidated into the hands of a few conglomerate media companies. This was exacerbated by the deregulation that followed the 1996 Telecommunications Act, leading to a sonic homogenization akin to the fast food found in strip malls and highway rest stops across the continent. Thus NPR had become, by the turn of the century, an alternative to commercial radio, and programs such as This American Life and Radiolab bridged the podcast era, exposing many listeners (ourselves included) to a longer tradition of public radio experimentation.

Public radio in New York had provided an outlet for Tony Schwartz (1923-2008), the pioneering sound archivist, field-recordist, and media theorist whose brilliant editing could be heard on “Around New York” broadcast on WNYC from 1945 to 1976. Or Joe Frank (1935-2018), another oft-cited influential radio performer whose surrealism and humor would certainly benefit many working today. After over a decade working in public radio, Chris and Sam have become a bit jaded by the formal strictures of the contemporary business. The World According to Sound still proceeds from the perspective of radio journalists (and not as artists), but instead of foregrounding the narrative voice, with sound used as mere stage-setting background, they make “sound the protagonist.” The Listening Series takes us full circle, forcing an experience of collective listening, not as background chatter while doing chores, but as sounds that deserve our dedicated attention.

During the golden age of radio in the 1930s, it was already clear that the potential of radio lies in what it abolishes: the space of the stage, time, unity of action, dramatic character and the audience as a self-appointed judging mass. But this experimentation rarely survives the institutionalization of radio, particularly when, as in America, the medium is driven almost entirely by commercial logic. As the nature of radio has evolved over the decades, so has experimentation with sound and form. An implicit æsthetic has nonetheless emerged from the medium’s “hot” audio, and the Listening Series pays tribute to many of these currents, including the most formally experimental public radio documentaries.

As Sam explains in this episode, abandoning the narrative voice of public radio is a way of giving autonomy to the listener, trusting them to draw their own associations and form their own judgments. Even when listening together, each listener will have a unique perception of the sonic space, comprised as it is by sounds both intentional and environmental. Radio art pioneer (and Kunstradio Online founder) Robert Adrian X (1935–2015) claimed that “The radio artist knows that there is no way to control the experience of a radio work.” This is far removed from the ideal of Western art music in which the composer’s intention remains primary. And while the use of blindfolds might suggest an “obsessive need for control,” as Chris puts it in our conversation, this is not to bend the listener to the artist’s whim, but instead to cultivate a deep listening practice. This is aided by the weekly schedule, which makes the event into a rewarding weekly ritual.

Shut Up and Listen!

The first half of this episode is drawn primarily from samples from the first four installments of the Winter Listening Series, as well as the WatS archive, with a few odd picks of my own. The second half shifts to emphasize some examples of radiophonic experimentation that we discuss in our conversation. The coda is a montage of WatS sounds I produced, as well as some nods to my own interest in the European tradition of radio plays, namely work from Mauricio Kagel (1931-2008) and Luciano Berio (1925-2003). 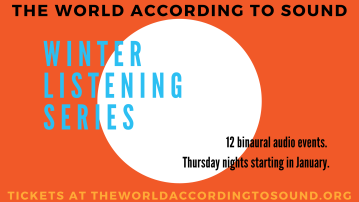 LINKS
The World According to Sound

The World According to Sound – “Mud Pots”

The World According to Sound – “Attention, Attention”

The World According to Sound – Centennial Sounds sample

The World According to Sound – Centennial Sound montage

The World According to Sound –  footsteps from Outside In

The World According to Sound – JS Bach – Prelude in C, 14 different keyboards chronologically 1746-today  from Time

The World According to Sound – “Ants”

The World According to Sound – Outside In – Binaural Haircut

The World According to Sound –  Transposition

The World According to Sound – “Mudpots”

Alvin Lucier – I am sitting in a room (final iteration)

The World According to Sound – Transposition – Day in one place

The World According to Sound –  Transposition – Day in one place

Hildegard Westerkamp – Beneath The Forest Floor

The World According to Sound – Matmos – Sound Breakdown

The World According to Sound –  Wave Organ