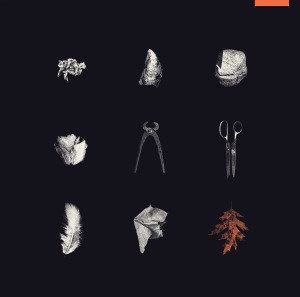 It’s been a long time since we reviewed a metal LP (Year of No Light’s Consolamentum our most recent).  But Isolation is something special.  This crunchy, angry, dense LP is a direct response to lockdown, originally appearing as weekly tracks and now collected as a set with one bonus piece.

To listen is to relive the pandemic in real time: “Quarantine” and “Ventilate” lead eventually to “Languish” and finally to “Faith” and “Respite.”  Raw, unfiltered feelings are translated to the violence of guitar and drums.  It’s surprising that there have not been more such albums, considering the pent-up rage of the pandemic: anger directed at politicians, COVID deniers, mask wearers and mask non-wearers, and of course the disease itself, added to the anguish at the inability to see loved ones; the wrenching sadness of loss; and the frustration at the mixed messages and prognostications.  Of course metal is the right genre for this.

Less than a minute into the album, an unbridled ferocity is already apparent, and a hummable melody has worked its way to the fore.  The stereo effects are excellent, perhaps a byproduct of the means of composition.  One pictures metal bands writing by playing, rather than by file exchange.  Toward the end of “Quarantine,” a woman speaks about the loneliness of returning to an empty house after dark.  This is only Week One.  As for “Ventilate,” it’s hard enough to hear the sound of a person gasping for life on a ventilator before seeing the video; afterwards, the mood is even more stark, as the horror film has become a reality.

Every week another song, another outpouring of emotion.  Sometimes the band had a lot to get off their chests: “Faith” is a whopping 11:44.  Sometimes their thoughts seem distilled, as in the single-length 3:56 “Onus,” characterized by static blasts and rapid drums.  One imagines how cathartic it would have been had KYOTY played these songs outdoors for their neighborhoods.  At the time, people were dressing up to take out their trash: the social event of the week.  Then again, most neighborhoods are not metal neighborhoods, despite the cans.

After the electronically adorned “Holter,” the mood dampens to mirror the effect of the extended lockdown.  It has been a month.  The populace is languishing, losing energy, tiring of “we’re in this together” and asking, “When will this be over?”  In New Hampshire, the lockdown would last nine weeks.  Little did they know, once freed, that they had not even seen the deadliest surge.  In light of how the world went after these nine weeks, one might receive “Fatih” as a false start, or as a viable force no matter what the conditions: a struggle for a blessing, akin to Jacob wrestling with God.  In the fourth minute, light begins to penetrate the morass: a consistent, melodic passage, a balm.

The time capsule nature of this album is one of its most appealing aspects.  These sonic snapshots are more reactions than reflections.  It will be interesting to hear how the music mutates once it is on the road.  Post-lockdown coda “In A Fog, A Future Like A Past Imagined” seems a direct response to Isolation Series closer “Memory,” as if the band decided to end not by looking back but looking forward.  By this point, the music seems less harsh; or maybe we have grown accustomed to its harshness, just as we’ve become acclimated to the new dangers of daily life.  (Richard Allen)