Disassembler ~ A Wave From A Shore 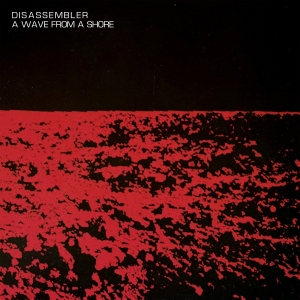 Disassembler is a cross-country collaboration from two familiar names:  This Will Destroy You founder Christopher Royal King and violinist Christopher Tignor, known for his work in Slow Six and Wires Under Tension, as well as his solo efforts.  The two have worked together before in TWDY, with Tignor contributing strings and live accompaniment, but time has altered their timbre.  Their post-rock now seems a thing of the distant past, although it’s only been a few years since their last studio effort.  Strain and one might still be able to glean the footprints of the old style, fading gracefully into the mud.

The new style is one of stately elegance, shifting on the opener from waves of grain to passages of pure piano and back.  Tignor’s violin is too expressive to call this ambient or drone, although both elements are present; the instruments work their way through the processing, poking their heads through static builds and walls of sound.  And now we remember, yes, TWDY did have ambient passages, increasing the dynamic contrast.  Perhaps this was a natural progression after all.  “Slow Fires” has a beautiful build that highlights both layer and note.  The ghost of guitar crescendos can still be heard through the synths.

Once the pair has settled into a template, the template changes.  Kudos to the author of the press release, who really should be writing for us if he/she would like a new unpaid job!  The title track, found in the fold of the set, is indeed where the impressions shift.  Tignor is showcased at the start, but backs away slowly as if honoring a King.  A miasma of texture melts across the music, erasing markers of time.  The title indicates a response or aftermath, the wave moving away from the shore, having already paid it a visit, pulling small shells from safety, returning to its source.

The subsequent piece is a tidal pool of calm, circling a short central melody: we suggest it as the next single.  “Debt” focuses on harmony, setting up the finale by shifting toward contemplation in its final minute.  And just like a classic post-rock album, this one closes with its longest and more dynamic piece, replete with brilliant builds, repetitions that set up tonal shifts, and alternating passages of loud-quiet loud.  The difference: the final third of the nine-minute track turns toward sparkling electronics rather than surging guitars and crashing drums.  The catharsis is the same; the spirit feels uplifted, the ears satiated.  A gentle denouement sounds like the settling of seas.  (Richard Allen)