Does anyone remember 2019?  In that innocent summer, Sontag Shogun and Lau Nau met on the Finnish island of Kimitoön to continue the sparkling collaboration that begun on Sontag Shogun’s Floréal.  The new album is about friendship, simple pleasures and breezy days, a way to remember that we once had such times and with a little luck and a whole lot of blessing, we may enjoy such times again.  The entire process feels homespun, from the field recordings to the intricate nature of the music to the occasional vocals, gentle and kind, sung in two languages.  To cement the idea, the album is released on two labels in two countries, each a special edition, one on vinyl and the other on disc.  (Both are embedded below; their seeming duplication is no error!)

Valo Siroutuu (The Light Scatters) begins with endearing sounds: a child’s voice, a badminton game. Guitar plays; water splashes; a bell rings; birds tweet; cars pass.  How can one not love this album? And it’s only just begun.  As is typical for Sontag Shogun, the sound design is spectacular, with full use of the stereo field.  Now we remember 2019.  We’d like to believe that we were carefree, but we suspect we were not.  Laura, Jesse, Jeremy and Ian, on the other hand, seem well rested, enjoying languid days near the shore, finding objects to bring home, discovering their sonic properties.  As their sonic world expands on “Leikkikalu” (“Toy”), we begin to drift backwards into nostalgia and forwards into hope.

The players wander into the friendly forest, and are greeted by the chirps of the residents.  No one is here to harm; every creature is safe.  This feeling washes over the music like the watercolors of the booklet; even a distant honk is heard as friendly rather than frustrated.  Lyrics take four tracks to appear, and even then, they rest atop a bed of nature and conversation.  When the song becomes a duet, it sounds like love.  x can mean “times,” but it also implies a kiss.

Light comes into play midway, the closing lyrics of the title track leading to “Suddenly This Darkness Comes Over Your Face,” the repeated title battling the perky music.  It’s as if the observer knows the darkness will not last.  The song summons the mood of late 2019, and is extended on “On Perceiving Time,” but forestalled by a return to intimate sounds such as piano, rooster and cat (none are hurt) and a feeling that the light scattered is being collected. 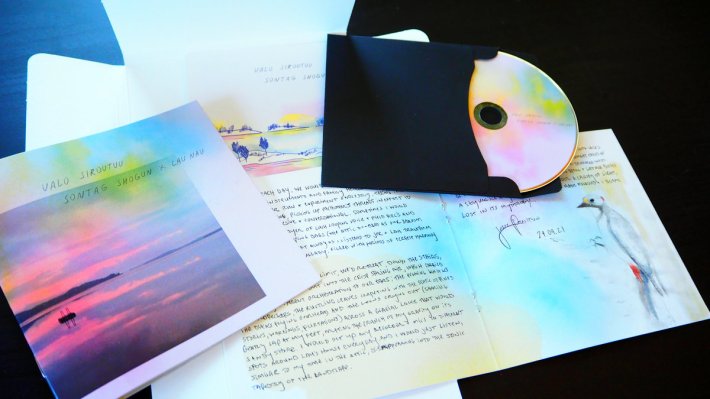 The rising instrumentation of “Kuiskaan Itselleni” (“I Whisper to Myself”) provides one of the set’s peak moments.  Lau Nau’s ethereal voice disappears into the music, only to reemerge at the end.  “Trampoliinilla Ikuisuuteen” (“On the Trampoline to Eternity”) walks back to the shore, merging playfulness and spirituality.  Unhooked from time and place, the music washes over the listener like pastel paint, seeping slowly into the thirsty paper of the soul.  (Richard Allen)