Take Me Somewhere Nice: A Tribute to Mogwai 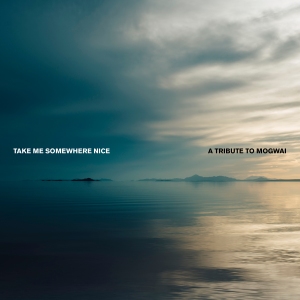 Few post-rock bands inspire tribute albums, but few last 27 years.  Mogwai is the exception, the Scottish band continuing to innovate and impress as it ages.  For some of our younger readers, there has always been a Mogwai.  This loving tribute album spans their entire history, from 1997’s Young Team to 2021’s aptly titled As the Love Continues, and incorporates both obvious and surprising track choices.  Some bands play their choices straight, while others take risks, hoping to add a different perspective.

One of the pleasing discoveries is to realize how well the originals have aged.  The initial explosion of “Like Herod” is just as powerful as it was back then, and at 11:40, it remains one of Mogwai’s longest tracks.  Our Sense of Time Is Failing‘s version, a minute shorter, is saved for the finale.  As expected, the mastering sounds more modern, but the sense of dynamic contrast is intact, enhanced by some descents into silence and a new set of electronics.  The Glass Pavilion covers “Summer,” a swift entry from the same album.  This time the track is one minute longer, given a bit more space to breathe, the more bombastic portions removed, close to the Ten Rapid version.  That collection includes some of the band’s earliest works, including “Helicon 1,” which sits in the opening spot here, courtesy of Red Light Skyscraper.  The original, a distillation of post-rock’s loud-quiet-loud sound, ends in a long quiet, not found in the new half-length take.

Come On Die Young surfaced at the cusp of the millennium and.solidified the band’s reputation before Y2K.  “Ex Cowboy” contains a good deal of complexity, its parts battling before forming a whole; Dan McKeown exaggerates these contrasts with drum machine.  Rock Action sees no love on the compilation, but the love returns with “Kids Will Be Skeletons,” from 2003’s Happy Songs for Happy People.  It is indeed a happy-sounding song, despite its title, with a touch of influence from The Cure, preserved by The Wolf of Wyndham in one of the collection’s most reverent versions.

By 2006, Mogwai was as close to a household name as post-rock bands ever get, and had grown more electronic, as demonstrated by the vocoder of “Acid Food,” covered here by Heirloom, beats and glockenspiel intact, sounding even more lo-fi than it did at first.  2008’s The Hawk Is Howling is represented with two tracks, “Batcat” and “Danphe and the Brain,” initially back-to-back but now separated by seven tracks.  “Batcat” in particular made a huge impact when it dropped, presenting an all-out rock sound, no drum machine in sight.  Herd of Elk preserves the excitement, rocking as hard as they can.  The subtler “Danphe and the Brain” begins with chimes, sets a steady, relaxed pace, but increases the density to produce an enveloping effect.  Grizzy Cogs tones it down at the start, but rises to a busier middle, holding the chimes back for greater impact.

Skipping ahead to 2011, Hardcore Will Never Die, But You Will was the latest comeback album from the band that never left.  Filled with rocking cuts, the album continued to cement the band’s legacy, and numerous tracks might have been covered here; the choice was “San Pedro,” short and punchy and the right length for a 45.  Uppergaff adds a voiceover and quickens the pace, adding a twist to the ending as well.

Now we enter the ACL era with the title track from 2017’s Every Country’s Sun, initially the album’s concluding piece.  Dislodged from that prime spot, it has less of an impact, but Smile Tribe keeps it fuzzy, languid and slow.  Some fans overlooked ZEROZEROZERO, but not AtonalitA, who cover the OST’s opening track “Visit Me,” making the spooky even spookier, lengthening the piano-led piece with an emphasis on a sweet violin line.  Finally, last year’s As the Love Continues is represented by “To the Bin, My Friend, Tonight We Vacate Earth” and “Richie Sacramento,” which one might say is a bit too early, but helps to contribute a sense of completion.  Non Somnia offers the former, faithful down to the opening sample, while Million Moons borrows a vocalist for one of the set’s two vocal tracks.  The slower pace of the new version serves it well, distinguishing it from the original while spotlighting the melancholy nature of the composition.

While many of these versions open new windows to the originals, none replaces their quality.  But that’s the beauty of tribute albums; they extend the life of tracks while reminding us why they are worth covering in the first place.  As a bonus, all proceeds benefit The Wildlife Trust, as chosen by Mogwai.  Since Mogwai is still active, these bands are not only paying tribute to the past, but to the present.  We’re more confident than ever that hardcore will never die.  (Richard Allen)