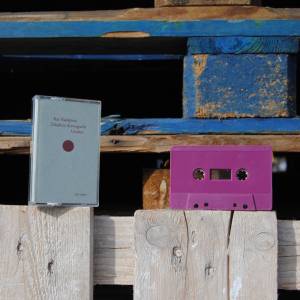 Crickets chirping, cicadas whining, bees buzzing: the sonic charm of insects rests on their ability to make noise without thinking about it, to swell into a clicking, buzzing cacophony that seemingly has no intention or reason. We tend to work so hard at organizing sound, squeezing it into complex forms and shapes to give it meaning. But the sound of long grass filled with crickets remains enchanting in its own, unstudied way.

On Utsuho, Rie Nakajima and Takahiro Kawaguchi create a shifting web of unidentifiable noises that sounds more insect than human, more unconscious than analytical. On their first collaborative release, Nakajima, a London-based sculptor and installation artist, and Kawaguchi, a Japanese musical experimenter, reveal a fondness for self-made instruments and repurposed gadgets, blending their homemade arsenals to explore a cohesive new sonic palette. It’s fun to guess where each noise originates: is that a little clapping toy, a wind-up robot, bicycle spokes, metal dragging on the floor, or an egg timer going off? Throughout the simply titled “Side A” and “Side B,” these and other sonic odds and ends dance in a flurry of activity that is at once mechanical and organic, a chorus of robotic insects clicking their little hearts out.

Rhythm is at the core of Utsuho, but not in the sense of a steady pulse or a dance-able groove. Instead, repeated clicks, scrapes, and whirs are layered to create compound rhythms that drive the music forward as they stop, start, and interact. Pitch seems like something of an afterthought: sounds with steady tones rear their heads occasionally in the form of wobbling metal sheets, whistles, beeps, and gongs. New sounds appear all the time, but even seemingly large entrances of new instruments or noises can be deceiving in their brevity. The sounds come and go in elegant fashion, entering just long enough to keep the ears searching for more, and never overstaying their welcome. At one point on Side A, what sounds like two kazoos enter, center stage, louder than much of what came before, and are never heard again.

The two sides of this tape sound like one 45 minute improvisation session, as if the artists gathered every instrument they had and played them when inspiration struck. Surrounded by an ungodly assortment of noise-making detritus, contraptions and everyday objects, Nakajima and Kawaguchi weave a musical texture of cicadas, scrap metal, and microwave beeps that marries the organic with the constructed and the improvised with the carefully planned. Like a dense field of insects, Utsuho can be both hypnotic and inscrutable, both specific and abstract. There are no real climaxes or builds, no points of arrival. Yet the whole is always shifting, and is more than the sum of its parts. (Peter Tracy)