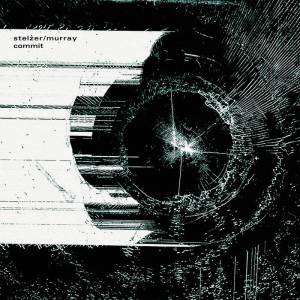 Commit is the third collaborative release from veteran noise/experimental musicians Howard Stelzer and Brendan Murray.  Since 2017 the two have been releasing recordings which document an intuitive fusion of their respective sonic palettes; Stelzer’s mangled tape, distorted signals, and sound effects, with Murray’s laptop and minimalist compositional structures.  Commit recalls the duo’s earlier releases, refining their improvisatory language of noisy collage while experimenting with oblique, sublimated melodies.

Although Stelzer and Murray have been pointedly obscure when it comes to describing what they do, Commit is appended with a rambling, at times comedic text by Stelzer which amounts to a simple idea: that the listener know as much about what this music is, what it means or is doing, as the composers.  The three tracks on the album bear this out; industrial decay, dark ambient, nocturnal soundscape and other such generically loaded descriptors approach the sound of the album but, while obviously drawing on these particular sonic languages, Commit carves out a sonic space of its own.

Stelzer and Murray are masters at evoking a sense of claustrophobia; crafting soundscapes which shift back and forth between spaciousness and its constriction through the layering of, depending on the volume of your headphones, quiet or deafening noise.  Each of the tracks moves through multiple spaces as signals and sound effects either puncture a spartan landscape or accrete into near chaos.  It is a testament to these musicians skill at manipulating timbre and deploying sound objects, that rather than seeming at war with each other, the various compositional strategies and sounds invoked across the album operate to instead orchestrate a chorus of noise.

Warbly synthesizers craft minimalist harmonics which ebb and decay underneath shimmers, wipes, hiss, squiggly and croaky signals, piercing sine tones, distant screams, breath, and scratches.  Although signals and textures are entering and just as quickly disappearing, there is an air of slow accretion, a building up of objects and dynamics to what occasionally feels like a breaking point as tracks end with various lengths and degrees of quiet.  All of the interruptions imbue the tracks with an air of restlessness and disquiet, refusing hypnosis and maintaining a sense of interest and curiosity regarding the sources of the sounds which comprise the track’s soundscapes.  “Commit 2,” the second track on the album offers a hint of a faint melody, imbuing it with more of the feeling of a soundtrack albeit one submerged far beneath gravely, cool static.

For durational, sonically dense music like that on this record, imagery and atmosphere are key.  While there is little more satisfying than for a listener and writer to mutually nail down the concept or image the music relates, both musicians and audiences, as Stelzer reminds us, should also maintain an interest in leaving the work open and multiple.  Although sounds inevitably retain associations, Commit mostly succeeds in avoiding the clarity of recognition or the narrative of allegory through its continual spatial shifts and relentlessly accretive mechanical collage.  One recommendation though, and as Stelzer encourages listeners in Commit’s accompanying statement, playing this record at a high volume does seem like a good idea.  (Jennifer Smart)