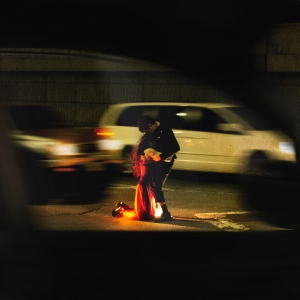 From ambient beginnings, the set will wind its way through the night, ending up not in a bed, but in a club.  The innocent synth tones of “Our Wretched Fantasy” set the stage for the early ten-minute album highlight “Tetramorph.”  The title refers to a creature of myth, whose aspects seem to change according to the angle of view.  The track goes through phases as well, from ambient to drone to electronic to rock, a bold maneuver that would fail in lesser hands.

“Death and Limerance” only amplifies the drama, the title referencing the crushing weight of obsessive, unrequited love.  The drones grow like vials of tears, creating a feel of claustrophobia with an undercurrent of romantic fantasy.  It can’t possibly be this hopeless ….  Surprisingly, while continuing to dwell in darkness, “Nausea” also offers some relief in the form of a melodic guitar line, a path from the underworld, should one choose to take it.  The choral coda implies that the sufferer has found their way to the light.  This high moment ~ synths soaring, voices surging ~ is the type of music that often occurs in the triumphant scene of a film.  And yet, because the artist has bought the listener’s attention and appreciation with darkness, the movement toward the light seems realistic, and the guitarist is content to dwell in this stage for a spell, wrapped in a fuzzy blanket of shoegaze.  The cooing tones of maria bc are like a bedtime story, the words barely heard, until “Heaven Comes Crashing” in a rush of junglist beats.  Wake up, it’s time to dance!

The arc of the album is like a passage through deep trauma, whether endured or self-created.  The words imply one outcome – opener “Our Wretched Fantasy” leading to closer “Our Wretched Fate” – but the music implies another.  If the heaven that crashed was but a fantasy, and reality yields a realignment of expectation, the fate need not be wretched after all.  One need only add one’s own post-credits scene, and point it in the direction one wishes to go.  (Richard Allen)