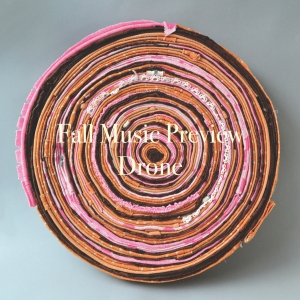 The tractors are plowing the fields, the leaf blowers are clearing the lawns, the construction crews are fixing the roads, and a new season of drone music ~ live and recorded ~ is upon us.  Today’s drone post picks up from yesterday’s dark ambient cliffhanger, tilting us toward daylight savings, the harvest and Halloween.

While late summer days continue to bring the heat, late summer nights yield a bit of chill, a tinge of the season to come, as the green begins to leach away, stolen by umber, russet and rust.  New sights, sounds and flavors await; we invite you to grab a pumpkin spice latte or pumpkin beer as you enjoy the last of our seasonal previews!

Our featured image comes from the Life Rings Art Workshop at the Laboratory of Tree Ring Research at the University of Arizona.

Sarah Davachi scored our coveted Album of the Year award in 2018 with Let Night Come On Bells End the Day, and while we can’t predict the fate of Two Sisters, we can already tell that it will be a contender.  Diving even deeper into spiritual music, Davachi presents music for carillon, chorals, pipe organ, brass, synth and strings.  While this study of early music is published on Late Music, the dichotomy highlights the timeless nature of these pieces (September 9). 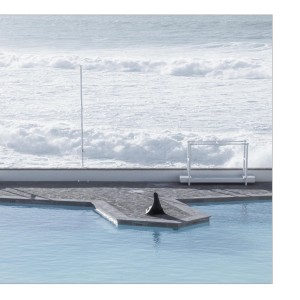 Sonic transformation is the theme of Real, the latest opus from Giulio Aldinucci.  The artist asks pointed questions about humanity’s relationship with digital media, challenging listeners to seek the authentic.  A choir is a reminder of another world accessible on the spiritual plane (Karlrecords, October 14, pictured left).  García / Navas / Reviriego / Trilla recorded Les Capelles in a Barcelona convent, producing a sense of holiness: the vast spaces implying the divine (Tripticks Tapes, September 23).  Angelo Harmsworth‘s Singe may border on noise, but it also possesses a palpable beauty borne on chords and fragmented intonations (Students of Decay, September 30). 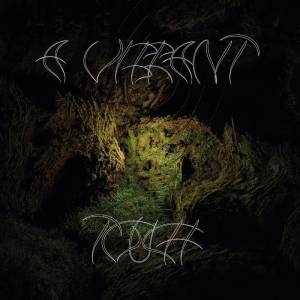 On Soft Fascination, Garek Druss builds from soft ambience to crushing drone, the shift apparent in the visuals for “Cella.”  The album, which was conceived as a meditation on parenthood, even contains a touch of opera (Debacle Records, September 2).  Modular synthesist Aleksandra Słyż constructs organic drones in deliberate fashion, restrained at first, but rising to dynamic crescendos.  The closing piece of A Vibrant Touch is nearly half an hour long, bolstered by violin, viola, cello and alto saxophone (Warm Winters Ltd., September 23).  In preparation for Sow Your Gold in the White Foliated Earth, Deathprod was given access to Harry Partch’s custom-made, just intonation instruments.  Honoring the spirit of the late composer, he turns in an elaborate, enthralling work (Smalltown Supersound, September 23).  Field recordings and sampled orchestral fragments make Nickolas Mohanna‘s Sight Drawings a multifaceted affair, leaning on several genres while confining itself to none (Run/Off Editions, September 9). 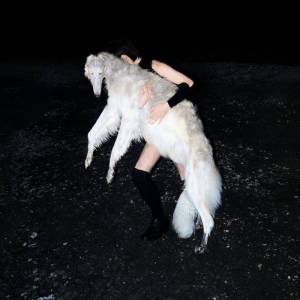 Midira Records is preparing a trio of cassettes for release on September 16.  Synth and shoegaze meet on Dunham‘s Zeren; crashes, field recordings and guitar reflect the bustle of a restless city on Jesus Antonio Vergara‘s R Derive Aplysia; and rustles and waves collide on Corrado Maria de Santis‘ Ruins.  Dinzu Artefacts ups the ante with four releases on September 9: a standalone release and the Cassette Batch #4.  John McCowen‘s Models of Duration is co-released with Astral Spirits, a study in contrabass clarinet (shown left); Lorenzo Abattoir amplifies the innards of a piano on Abstersion; Neti-Neti makes spiritual noise with ritual percussion and voice on Impermanence; and Aloïs Yang uses Sonic Animism: The Emergence to elaborate on the relationship between the sentient and non-sentient. 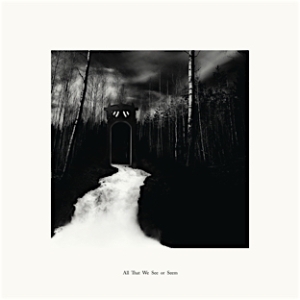 Cornflux Coldwell was inspired to compose The Phantomatic Coast after spending years wandering England’s eastern shores.  His findings have now been published in an essay and recorded in musical form on an album replete with field recordings and a sense of imminent loss (Subexotic, October 23).  Also on Subexotic, Dogs Versus Shadows uses Oracle Mama Dot to reflect on a work by British-Guyanese poet Fred D’Agiuar.  Manipulated tapes and looped drones underline the narrative conflict (September 23).  The moody self-titled album from All That We See Or Seem takes its name from an Edgar Allan Poe poem, and honors the poet’s darkness with its own intensity.  Walling vocals waft over the set, due October 21 on Miasmah (pictured right).  Siavash Amini & Eugene Thacker collaborate in an unusual way on Songs for Sad Poets, because Thacker’s words ~ although found in the programme ~ are not read.  Amini drapes the tone of the words in oppressive soundscapes, reflecting the lives of the “cursed poets” with an aural form of empathy (Hallow Ground, September 23). 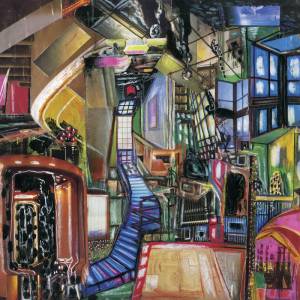 We were excited about the doughnut pipe on Bill Nace‘s Through a Room; until we were told we couldn’t eat it.  Nace’s drone also contains hurdy gurdy, taishōgoto and a hearty amount of distortion (Drag City, November 11, seen left).  Strings and wind are mulched and distorted on Music for Delirious Episodes, as Ard Bit challenges assumptions about mood and labeling.  If one enjoys music that is left of center, might one be more accepting of those whose personalities are the same? (September 19).

Cindytalk‘s Subterminal is a meditation on “environmental and social breakdown,” and while it may not be cheerful, it is certainly an album for our times (False Walls, October 21).  Adam H. formed an ensemble to record Floods: two side-long tracks that address both literal floods and the opioid crisis, peering into the future to prophecy the outcome.  Limited lyrics are present, plus a post-rock tilt (Debacle Records, October 7).  Grief and mourning are the backdrop of William Fowler Collins‘ Hallucinating Loss, which the label points out was written before the pandemic.  A host of collaborators, including Aaron Martin, contribute strings and lamenting, wailing voice (Western Noir, September 2).

Russian ritualists Jagath have been recording in an abandoned swamp drain for years, but sadly “the oil tanks are finally scrapped.”  This makes Svapna particularly bittersweet, but we are left with some haunting images, as seen below in the promo video (Cold Spring, September 30). 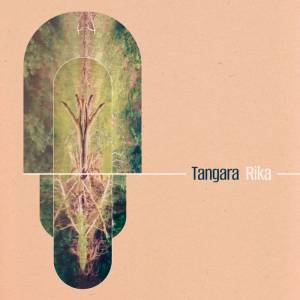 Songs for a Tired City‘s In Plain Sight merges crowd samples, synthesizers and (on a few tracks) beats, in an effort to reflect the New Delhi city experience (Subcontinental Records, September 2).  Drone cedes space to percussion on Lost Comrades, the first single from Starlings‘ second album, Ax Locked in Pipeline.  The album will be released in November along with a reissue of the classic first (Machine Records).  Méryll Ampe uses a host of experimental techniques on W7E, the most intriguing being “hydrophone recordings of vibrations through skin.”  The album is out November 4 on Misanthropic Agenda.  World music meets soft drone on Rika, the first fruits of an ongoing, mutating project from Tangara.  The group likens its form to a plant, ever growing, leaning into the sun (Submarine Broadcasting Co., September 2).

Who said math couldn’t be fun?  As one might expect from the title, Greg Davis‘s New Primes is mathematically-oriented, transforming prime number sequences into long sine tones.  (grayfade, September 23). The thrillingly abrasive Diode, Triode combines two multichannel works by Marc Richter (Black to Comm), folding in stock market readings and “inscrutable voice” ~ the opposite of New Primes, save for the mathematical connection (Cellule 75, September 16).  Straddling the center of the sonic see-saw is Haarvöl + Xoán-Xil López‘ The Uncanny Organization of Time, which addresses linear time, timelessness, and the detachment of art from traditional temporal concepts (Crónica, October 11).

Steve Bates‘ All the Things That Happen is a thick, lonely isolation record, recorded on a Casio SK-1 amid a host of distortion.  We hope that the dog on the cover is only sleeping (Constellation, September 23).   Daily improvisations occupy the bulk of Hiræth, which Mirt writes is “not just another pandemic album.”  Tracks such as “Pangea” speak of a larger vision, while gongs and bansuri push the piece into the realm of world music (September 1).  Unusual noises travel the haunted hallways of Bride Stones / False Vacuum, a delirious nighttime excursion from Luke Lund (Terranean Recordings, September 2).  Bruno Duplant and Seth Nihil fold field recordings into the memory of things, mingling nostalgia and imagination in an often-unsettling manner (Sublime Retreat, September 2). 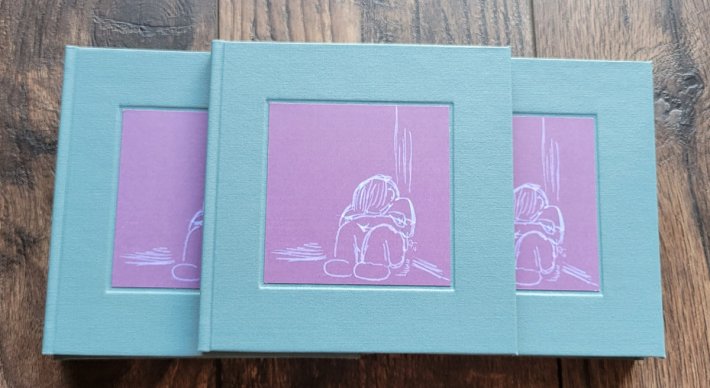 It’s obvious from the cover that Lungs Like Lead is about depression.  As The Corrupting Sea writes, “You are loved and the world needs you.”  The album attempts to lead listeners out of a hole, using beats instead of breadcrumbs (Somewherecold, September 2).  Slow guitars and slower drums dominate Tape Shadow, a collaboration between Julia Reidy / Morten Joh.  But the purple cassette case is cheery, and the closer nudges toward hope (Futura Resistenza, September 20). 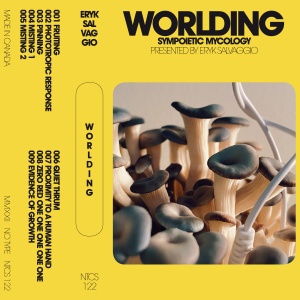 Hard Return, “a label for repetitive/persistent music” has two releases set for September.  Wounds‘ I Have Walked Among the Truths starts as a simple piano loop until it is layered, spliced and multiplied (September 1).  Charlie Butler‘s Haunted Moon is about the terrors of moving house, and expands to a cosmic level (September 22).  Finally, fall’s harshest release comes from Network Glass and Jason Crumer, on the appropriately named Misanthropic Agenda.  Prerequisite is “an auditory thesis on the state and history of noise.”  Check those woofers before pressing play (November 4)!