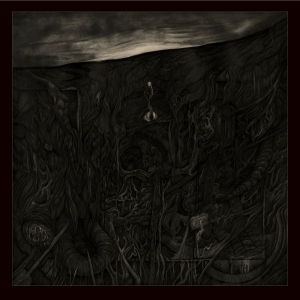 Furie is as dark as its cover art, nearly black in tone, like the sudden skies of autumn when one emerges from the office.  Released on the first Friday of fall, Innerwoud ‘s album has found its proper season.

if the moniker of double bassist Pieter-Jan Van Assche is pronounced inner wood, the video for “Raseri” is an apt reflection both semantically and visually.  Tuur Uyttenhove attaches a patient, sprawling narrative to a patient, sprawling piece, rewarding immersion in the complete package.  The video seems to portray the allure of a forest cult, emphasizing both beauty and danger, akin to the music ~ slow camera, slow drone, slow realization, perhaps too slow to shield one from sacrifice.  The bassist proceeds from plucks to strikes, laid atop an ominous chorus of chords.  The prey is revealed as possible predator.  Or is this all a metaphor, the stagnancy of buildings set against the freedom of forests?  The music lurks, beckons, warns, invites.  A slug threads over rough ground.  What is the meaning of the final stare, the flinch of the eye, the crinkling of the brow?

The other tracks are no brighter.  Even the cover implies the last glimmer of light before the enveloping dark.  “Marsyas” is the distillation of a legend, a satyr who loses skin and life in a contest with Apollo, provoking a literal river of tears.  If the first track symbolizes anger and the second sadness, the third suggests fear ~ a natural feeling brought on by the birth of a daughter.  “Kijm” (“germ” or “fruit”) begins with his daughter’s heartbeat and a series of insistent tri-notes.  The second half is subtler, although falling short of the artist’s “hopeful harmonies.”  Instead, it’s but a more down-to-earth danger, as Innerwoud hopes his daughter will grow up to be a Furie, standing her ground in a world of competing elements.

The key to the album is found in Van Assche’s statement: “darkness works for me as a vehicle to which I link stress and doubt in order to control them. In this way I dare to face the future with confidence.”  He doesn’t just stare into the abyss; he goes into the abyss.  As terrifying as it may seem, Furie is meant less to haunt than it is to heal.  (Richard Allen)