Everybody loves leftovers ~ no cooking is involved, and the flavors have had time to marinate.  In early January, we cover a few leftovers from the prior year that were submitted too late for coverage.  One such tape is Hannibal Chew‘s El Borneo De Dios (Sinfonías Resgatadas en la Isla de Borneo), itself comprised of leftovers: splices of Gonçalo F Cardoso‘s Impressões de Outra Ilha (Borneo) rearranged as a phantasm.  Pablo Picco’s cover art is a perfect depiction of the music: a colorful collage with its own rhyme and reason, highlighted by a remixed bird.

The birds – so central to the former recording – return, along with rain, fireworks and muddled conversations.  The entire recording sounds like a fever dream, or perhaps the impression of a drug-addled Bornean stumbling through festival streets.  There’s some singing, some spooky humming, the disorientation of a passing motorbike.  A piano tune threads into tape decay and disappears.  This alternate trip down Memory Lane operates more as impression than as reflection.  Only occasionally (the cricket section at the end of Side A) does it sound like a field recording; for the most part, this sounds like the story one weaves after visiting a fantastic place, hoping to communicate the ineffable, making fiction out of non-fiction to reveal a deeper truth. 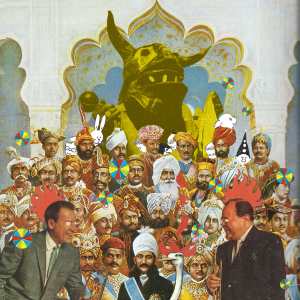 Another Discrepant release, Bardo Todol & Robert Millis‘ A Magnetic Road to Hell, seems similar on the surface, but is different underneath.  This tape is also a jumble of impressions, but is more of a conversation between nations and friends ~ in this case, Cordoba (Argentina) and Seattle (USA).  Instead of exchanging words, these artists exchange sounds, subsequently blended and layered, origins obscured.  Car horns blare while a choir sings; bells ring, dissolving in a bed of static drone.  Halfway through the first side a rail car can be heard, suggesting a strange journey to an unfamiliar place.

The cover collage recalls Sgt. Pepper’s Lonely Hearts Club Band and again matches the music.  In a manner akin to El Borneo De Dios, familiar sounds are made unfamiliar; wax cylinders, 78s and field recordings become chimeras when combined.  The tone remains mysterious throughout, enticingly undefined.  The fun angle is that this is a tape of tapes, like a box of discarded cassettes somehow fused into one, discarded detritus salvaged and saved.  Yet one is never sure if this is live or Memorex; on Side B, the artists seem to play music on a junk heap.  It’s all spectacularly entertaining; one is never sure what one will hear next, only that it will make sense.  The internal logic is difficult to decipher, yet easy to enjoy.  (Richard Allen)