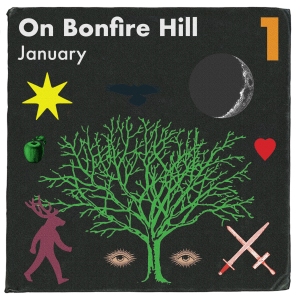 This past weekend saw the launch of a new series called A Year on Bonfire Hill.  On the 21st of each month, Bonfire Hill (Rebecca Denniff and David Owen) will release a 12-minute track tailored to the folklore of that month.  Next year the project will be released as an album, although we suspect it may be edited down from 144 minutes.

While Folklore Tapes is the unquestionable leader in calendar audio, it’s great to hear Castles in Space enter the fray.  Castles in Space is best known for electronic music, and while one would be hard-pressed to dance to January, it’s easy to glean the influence of electronic music in the lurking synths and prominent samples.  January is not as abstract as musique concrète, but fits the definition of collage.  Denniff sings fragments of folksong as field recordings tumble in the background; spoken snippets add texture.

After an introductory melange, the theme begins to emerge in the words, “January close the door, for the year is turning, turning.”  The inclusion of loops underlines the image of turning, while the mention of snow is backed with precipitation.  A historical voiceover pokes through the morass, if only for a moment.  The feeling is both ancient and new.  “We’ll sweep away the old year, and bring the new year in.”  As the organ enters, the narrator speaks of attending church.  At the same time, Denniff repeats the word “murmuration” and the synths start to penetrate the precipitation.  Only when these sounds recede does one hear the birds.  A group of revelers passes by.  The singer repeats the opening theme, adding a coda.

Will each installment contain such attention to detail?  If so, A Year on Bonfire Hill may turn into one of the year’s most compelling projects.  The year is turning, turning.  (Richard Allen)