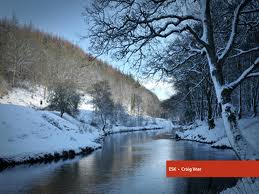 “River Esk, Frozen”, recorded at the North Yorkshire Coast, was one of the highlights of Aud Ralph Roas’le.  Craig Vear‘s follow-up moves further up the coastline, tracing the river “from source to sea”.  The result is a sound sculpture with a clear focus and a literal sense of direction, one that demands multiple listens yet retains its allure no matter how many times it’s played.  (Okay, that’s probably an exaggeration; I can vouch for the first dozen plays.)

In order to capture these recordings, Vear traveled upriver, beginning at the harbour and ending at the Esklets.  He then merged and re-arranged his recordings so that the piece would reflect a river flowing to the sea.  Ironically, this causes ESK to flow backward in time from spring to winter, but the seasonal changes are less obvious than the gradual shift from the natural to the manmade.  This aspect of the recording is as inescapable as the fact that it is produced by a human being; there’s really no way to capture something like this without the intrusion of the human element.  This also applies to unplanned sound – passersby, workers, transport systems.  As Gordon Hempton complains in One Square Inch of Silence, there’s little escape from the presence of technology, whether chronic noise or air traffic.  By contrast, each bird, cow, duck and even domesticated dog comes as a welcome surprise; while they are not made out of water, they are part of the river’s extended environment and as such deserve their inclusion.  There is one sound here that is totally unwelcome, although it doesn’t arrive until 36:11: an over-miked creak that sounds a bit like a drunk logger.  Since it arrives at the tail end of a section containing the woodpecker repetitions of unidentified machinery, it’s not a total startler; but the piece would have been better without it.  This being said, the contrast leads one to meditate on the intersection between the land and its inhabitants, so perhaps it has a purpose after all.

The sound of water is obviously this recording’s raison d’être, and Vear’s equipment is extremely effective in capturing not only crispness, but depth.  As a sound sculpture, as opposed to an untreated field recording, ESK moves through various phases, retaining a busyness that is not often found in real life.  Listening is not entirely like walking downriver; instead, it’s like pulling over every once in a while to take in the sonic field.  This provides for great contrast between loud sounds (the waterfall-like tendencies of the Esklets) and the quiet (the river’s flatter, slower rest stops).  At times, the apparent sources change as rapidly as pages in a book; for example, the rush that turns into a trickle in the 19th minute, followed by what sounds like breaking ice in the 20th and a deluge in the 21st.  These same sounds tumble and return in the ensuing two minutes.  If one were to stride beside the Esk, one would not encounter such sudden changes in timbre, but they lend the recording a sense of excitement that is not often found in the field.  A close cousin might be Cedric Peyronnet’s Taurion River project, in that Peyronnet’s recordings arrive in both static and redacted forms.

Vear’s Antarctica and Summerhouses were both effective (especially the former in its multi-media presentation), but Vear shines in the extended format like a good short story writer who suddenly discovers he’s a great novelist.  ESK is easily Vear’s best work to date: concentrated yet versatile, speechless yet profound.  The snowy greeting card packaging makes the release seem like a communication from a friend.  After hearing and seeing the Esk, one yearns to visit it as well; no greater compliment can be given.  (Richard Allen)