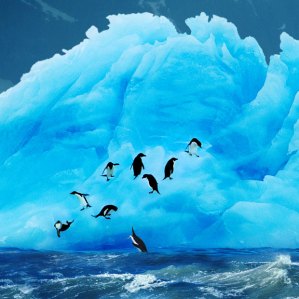 As the leaves land, as the frost forms, and as the first flakes begin to fall, we set our minds to winter.  Some will experience the stalwart winter of Wallace Stevens, and others the cold, claustrophobic winter of Sylvia Plath.  These artists have attempted to capture the sound of winter in the literal or metaphorical fashion.  Some composed in white-out conditions, in sub-zero temperatures, in remote cabins.  Others gazed through their windows, heated by cozy hearths.  A few ventured into the elements to record and cavort. Listed in order of perceived temperature, from stasis to movement, frostbite to Frosty, these are the sounds of winter.

To read the full reviews of each release or to purchase them, please click the links below each entry!

BJ Nilsen and Stilluppsteypa ~ Góða Nótt (Editions Mego)
Góða Nótt (Good Night) receives our award for The Year’s Coldest Album.  The artists recorded the vinyl release while snowed in, surrounded by white.  Fortunately, they had some Brennevin to keep them warm.  Incorporated into the drones are the sounds of snow, generators, chisels against ice.  These artists might have had a good night, but color was dying just outside their walls.

NE Trethowan ~ RS (Slow Records/Tavern Eighteenth)
Winds, water, snow and the sound of distant choirs inhabit the cold corners of this intricate release.  Torturous creaks and rustles imitate the sound of frozen gears.  Traffic passes by on the outer roads, indicating that someone has shoveled enough to escape their driveway.  The world is in motion, but slow; in this winter wasteland, nothing happens at normal speed.

Nicholas Bernier ~ Music for a Book (Denovali)
Another snowed-in album, this disc (half of Music for a Piano/Music for a Book) was recorded in a country cabin around which whiteness gathered like unprinted pages.  The footsteps in the snow mark the spaces in which the lonely notes were entered, ending a long session of writer’s block.  Music for a Book is music that unfolds like a book, slowly revealing its narrative as it unfolds.

Tropic of Coldness ~ Commuting (self-released)
Back and forth on the rails, with no end in sight: the daily commute, a slog through ice and slush to the frigid emotional climate of a sterile office.  Commuting is the sound of a heart in stasis, a body numbed by unvarying routine.

The Cloisters ~ Little Winter (initially self-released)
This standalone EP (later incorporated into a bonus disc for Second Language) begins with the sound of a lonely wind howling its bleak discontent.  Harps and harbor seals soon join the chorus, followed by a full-fledged choir.  Church bells sound; a carol is played.  Succinct as its title, Michael Tanner’s newest ode to winter evokes a sense of holiness and awe, and serves as a sublime follow-up to his previously-honored Wintersongs, recorded as Plinth.

Alex Kozobolis ~ For Snow (self-released)
The ticking of a grandfather clock provides this solo piano EP with its comfortable veneer.  Inside the house all is safe and warm; the falling snow is benign.  This is the snow of childlike wonder, the kind that makes one don mittens and scarf and frolic in the town’s newly-plowed paths.  As it fell, we stood together, and everything was new.

Glacis ~ Music for the Animation Tohu Va Vohu (Mini50 Records)
This EP (set for physical release in 2013, along with DVD) is the soundtrack to a short animated film about the changing of the seasons.  The EP starts in winter, breezes through the rest of the year, and makes a swift return, as if entranced by the glittering white.  This makes it a perfect seasonal choice, comfortable with cold and oddly melancholy at the thought of the inevitable melt.

Matteo Uggeri | Luca Mauri | Francesco Giannico ~ Pagetos (Boring Machines)
The culmination of the years-long Between the Elements quadrilogy, Pagetos (Frost) allows piano, violin, cello and field recordings to pirouette sweetly atop the frozen earth, exposing their nuances like the sides of a snowflake.  When chimes, trumpet and guitar join the mix, the set blossoms into swatches of sonic color.  Could winter be ending?  Would it be so wrong to want to prolong it?

The Echelon Effect ~ Seasons Part 4 (self-released)
Another great series comes to a close with a fourth entry, as David Walters completes his own year-long excursion.  “With a warmth inside, I walk into the dark” is a single extended track, a successful experiment for the artist previously known for shorter post-rock pieces.  The glockenspiel – a winter instrument if there ever was one – is responsible for the hopeful mood, the rhythmic drums for the sense of propulsion; but the keyboards and wind provide the track’s emotional underpinning.

Craig Vear ~ ESK (3leaves)
Finally all is in motion once more.  The river Esk flows to the sea, as faithfully chronicled by Craig Vear in this evocative soundscape.  But wait ~ in arranging his sound sources, Vear moves in reverse from spring to winter.  The album flows backwards and forwards, like memory and hope, like the seasons that have passed and the seasons that are yet to come.