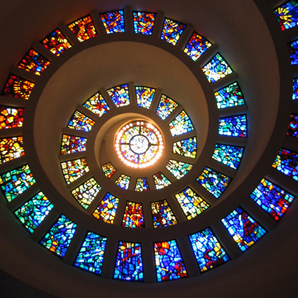 The music of organized religion is often bland when it has no right to be.  The subject matter is the breadth of life, from the heights of heaven and depths of hell to unknowable mysteries, hallowed understandings, and transcendent awe.  These artists, whether intentionally or unintentionally, create the music of faith without words, reflecting a spectrum of emotion from praise to despair and back again.  With the exception of the first collection, recorded on the grounds of a monastery, this is not the type of music that is typically encountered in worship, but it sheds light on the human experience like the morning sun glittering through stained glass.

The title of this column pays tribute to Headphone Commute’s annual year-end lists, which we totally adore!  The albums are listed in order of texture.

Pietro Riparbelli ~ Three Days of Silence (Gruenrekorder)
From a vapid stillness, to a buzzing fly, to a rising drone and the sound of a distant organ, this sound artist chronicles time spent in the Sanctuary of La Verna.  Chanting monks compete for sonic space with the echoes of architecture and the drips of precipitation.  The pace is contemplative and sedate, yet sometimes maddening – just like the vicissitudes of faith.

Thomas Tilly & Jean-Luc Guionnet ~ Stones Air Axioms (Circum Helix and MicroClima)
Anyone who has ever lived in an old house knows that buildings make noise.  Sonic investigators Tilly and Guionnet charted the acoustics of St. Pierre Cathedral in Poiters, using the organ as a sound generator.  Then they added sine waves and white noise.  The result: a map of the invisible unseen.

MB + ICS ~ Vir-Uz (Farmacia)
Of all the books collected in the Bible, the Book of Job is said to be the oldest, which implies that mankind’s very first question was “Why?”.  These artists translate Job’s despair into a bleak score, enhanced by stark field recordings from the Jewish cemetery of Alessandria.  The early version of the story ended as Job repented in dust and ashes; MB and ICS respect his loss without adding a falsely cheerful ending.

Talvihorros ~ And It Was So (Denovali)
The seven days of creation (including the day of rest) are loosely replicated here by Ben Chatwin with tendrils of melody and drone.  As the Spirit of God moves over the raging waters, Talvihorros soars over the chaos and shapes it into a semblance of order.  Once a tempo is established, it operates like Time: the sun, moon and stars, serving as markers between the Beginning and the End.

FluiD/John 3:16 ~ The Pursuit of Salvation (Alrealon Musique)
We’ll admit it; including a split EP on our list is a sneaky way to include two artists for the price of one.  These artists tell two parts of the same story, with FluiD handling the plight of the Israelites under Pharaoh and John 3:16 covering the flight through the Red Sea.  Their music is mined with danger, like the path to the Promised Land: a light so harsh that it can destroy the very people it illuminates.

Church and State ~ Live at Huntingfield Church 29/1/2010 (Fenscape Recordings)
This live document would have sounded holy even if it had not been recorded in a church.  The hall is resonant, the electric guitar shimmering and full.  When Matthew Moore adds light processing to his brother Adam’s notes, the effect is akin to the sparkle of sun on puddles.  We’re fortunate someone was around to capture the wonder of this luminescent evening.

Navigator ~ Navigator (self-released)
Christian instrumental artists don’t get a lot of press.  For many in the Christian music industry, it’s all about the words.  But faith is much more than words; the more one seeks to articulate one’s faith, the more one realizes the inadequacy of language.  Navigator’s soothing album provides a wide angle backdrop against which thoughts of faith can expand rather than contract.

James Murray ~ Floods (self-released)
As much as 90% of the world’s population lives near water.  Combine this fact with global warming and its related disasters – torrential downpours, broken dams, hurricanes, tsunamis – and Murray’s album becomes a statement of faith.  Every year Murray watches the twin rivers rise near his home, flooding its boundaries; and every year, it recedes.  Floods is the story of losses endured, hope unbowed, and gradual epiphany:  to everything there is a season.

Cam Butler ~ Save My Soul (Symphony no.3)
As the most accessibly orchestrated entry on this list, Cam Butler’s third symphony (including string ensemble, glockenspiel and harp) is also the album most likely to find a home in houses of worship.  It’s the sound of seeking – a soul lost, then found – and it eventually leads to “Some Kind of Peace”.  The journey seems to travel across open prairie, with hungry horses – a modern day Exodus scored by a contemporary Morricone.

Golders Green ~ Suite no.2 in Drone major (op.3) (BLWBCK)
The final entry on this year’s list is the most topically complex and sonically challenging.  Golders Green’s project is a confluence of events: a faith fractured by a harsh Eastern Orthodox upbringing, and a hard drive destroyed by a crash.  In Suite no.2, the artist attempts to reconstruct his original compositions, albeit in altered form.  At the same time, he collects the splintered remnants of his faith and finds something worth salvaging, even if the pieces no longer fit.