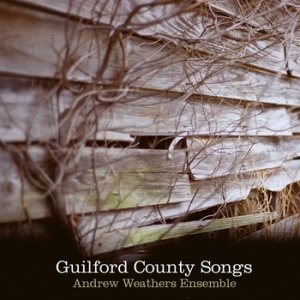 When is a song in fixed form?  Do songs have definitive versions, and if so, should they always be performed in that fashion?  Should a concert seek to replicate a recording or vice versa?  Is is better to record new songs or to perfect old ones?  These questions come into play on Guilford County Songs, a new version of A Great Southern City recorded as a quartet.  (One track also appears in a different form on We’re Not Cautious.)  A cross-discipline corollary can be found in the work of graphic artist David Mack, whose Kabuki has been revamped consistently over the years, from black and white to color, ink to paint.  In like manner, Guilford County Songs is the deluxe version, despite the loss of two key players: more focused, better mastered, and supremely confident.  Is it the definitive version?  For now, it is – but Weathers may yet go from ensemble to orchestra, in which case all bets are off.

While many performers sidestep into different genres – ambient to folk, indie to post-rock – Weathers takes giant leaps.  His comfort zone includes gospel, bluegrass, folk, modern composition and drone.  This variety provides his recordings with an unusual freshness.  The trick is connecting them in such a way as not to feel hodgepodge, which the quartet is able to achieve.  Breaths, shuffles, and steps lend the recording an aura of intimacy.  The words “Get home safe” provide a blanket of comfort, delivered at both the beginning and the end.  The members of the ensemble share these words with each other as they tour, a mantra that keeps them grounded.  There’s a little singing elsewhere on the album – not much – but the quartet seems joyful enough to break into song at any time, and the atmosphere they create is conducive to such displays.  The warmth exuded is so great that even a foray into dissonance on “Right Now, & Now, & Now” is easily incorporated into the whole.

Guilford County Songs sounds like a homegrown album, created by a bunch of good friends gathered on a front porch with a plate of biscuits and some drinks.  It’s not just the banjo that’s friendly; even the cello is approachable.  The absence of drums allows the fullness of timbre to shine through.  Like its cover, the album is splintered wood and creeping vine: natural, rough-hewn and true.  (Richard Allen)