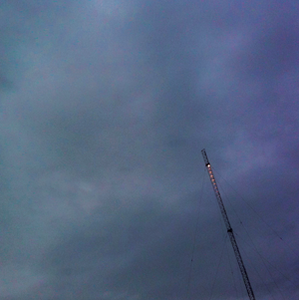 An intriguing title is a great start, and from the very first track, Melodies from a Dead Radio delivers on its promise.  One would imagine said melodies to be static-filled, ghostly, out of focus, difficult to comprehend.  The shortwave radio burst of “Globes” is a series of words that sounds like ignition, a spark struggling to break through.  Warbles and drones surround the transmission, choking it into non-existence.  Perhaps Jeff Barsky (Insect Factory) is trying to say something about the difficulty of saying something: the intentional message lost in the debris.  On “Radio Forecast”, the album’s standout track, waves and drones meander, meet and strike up a conversation, establishing a semblance of form before the locusts descend.  The last third of this track sounds like the artist’s nom-de-plume: an insect factory at the meat of its production schedule, shedding wings to meet a quota as antennae fall all around.  This is where Barsky is at his finest: adding layer upon layer until all the levels are in the red.  The beauty of the track is that both form and chaos grow at equal levels: tempo and rhythm linked to volume and mass.

The second side of the LP – Fabrica’s first foray into the vinyl format – sounds more like the amplified production of ants than the hive communications of bees.  The hinted-at melodies are more apparent, the interference less defined.  In “New Incision”, notes blink on and off like fireflies, backed by gentler drones, eventually giving way to filtered tones and quieter beds.  The album’s brief coda, a mirror to the opener, provides the set’s clearest example of tune, a vaguely Indian guitar melody tailed by distant bells, yet still fuzzy around the edges, still distant and detached like a song shot into space and forgotten.  What’s in a name?  In this case, the name is simply the abbreviation for the sound.  (Richard Allen)