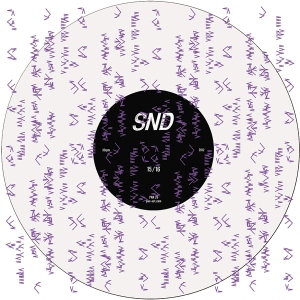 It’s the little details that make the big difference on this release. The defining point at where SND and NHK separate on this split release is when the former’s kick drum makes an appearance. It is so precise, so artfully crafted, so perfect for its job that it is impossible not to go into raptures about it. It provides the impetus and the anchor around which SND create the 16-minute opus of “15/16” which fills up their side of the 12”. Using the simple, minimal tools that the duo of Mark Fell and Mat Steel have bent to their will for some 15 years now, “15/16” gradually ratches up the tension across its duration. The worry with split releases is that an artist won’t contribute their best material, but this is top drawer material, and the only downside is that it rather puts the efforts of NHK into the shade.

The glitchy nature of SND often meant that early in their career they were lazily compared to Autechre, but there wasn’t much similarity to start with and in reality the two outfits moved further apart overtime; Autechre have become more abstract whilst snd have moved closer to the glitchy dub style of Basic Channel. The Warp duo are a key reference for NHK, however, who seem rather too in awe of their influences to produce too much that sounds in their own voice. The Japanese duo of Kouhei Matsunaga and Toshio Munehiro put four tracks on their side of the disc, but only two of these (at a push) make the grade by not sounding like an out-take that was lying around the studio when it came to submitting material.

The nature of split releases mean that often somebody somewhere is disappointed; it’s the rare disc that provides two equally strong sides that both appeal to a listener’s tastebuds, and there is often the feeling that one of the pair is pulling their punches, trusting that the artist on the other side will do the same. So it’s entirely possible that those who get hold of this release will bounce around the room to NHK’s lively glitch-hop and be left cold by SND’s lengthy work. The more likely scenario, however, is that SND have created such an impression with “15/16” that nobody will really worry about listening to the other side, nor care. (Jeremy Bye)