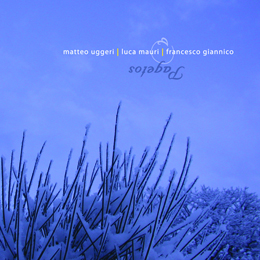 When one waits half a decade for an album to appear, one grows antsy.  Doubt sets in: will it ever be released?  Will it justify the wait?  In this instance, add the fact that the album is the concluding installment of a set, and the stakes rise considerably.  Thankfully, with only one small incongruity (the package is a different size), Pagetos surpasses expectations, and honors the set as a whole.

2007’s Erimos (desert) and Nefelodhis (cloudy) were the first entires in the Between the Elements Quadrilogy.  Each holds a finely-crafted mirror to its subject, and continues to sound contemporary.  Erimos features the work of MB (Maurizio Bianchi), Hue (Matteo Uggeri) and Fhievel (Luca Bergero), and while it may be sparse, it sparkles with life.  The drones come across as distant sandstorms, the electronic pings as desert insects.  The single-track album is both clever and restrained; one hardly knows where the turntables end and the electronics begin.

Nefelodhis is broken into eight parts, and would make a fine sonic companion to The Cloudspotter’s Guide and The Cloud Collector’s Handbook, as five of the tracks reflect specific types of clouds.  As expected, this is a more active recording than Erimos, with slightly more traditional instrumentation, as MB is joined by Sparkle in Grey.  Nefelodhis sounds like fragile things breaking in the sky, which is of course its intention.  The violin adds a level of drama, of skies about to burst.

Kapnos (smoke) followed a couple years later, but ran into an immediate problem: was it about smoke, or about fire?  The cover seems to indicate the latter, as do the evocative field recordings.  The sound of breaking glass on “Four” reflects the effects of intense heat, and the music of Meerkat (featuring a who’s who of the Italian underground) does much more than simmer and smoke.  One can’t record the sound of smoke, and the ear is naturally drawn to fiery crackle and whoosing extinguisher, so Kapnos succeeds only as something it’s not.

The back cover of Kapnos proclaims, “This is the sister album of Pagetos.”  But for eager fans, the wait would be nigh interminable.  Summers turned to winters, fire-ravaged forests to new sprouts.  Floodwaters reclaimed their lands, then retreated.  And finally, Pagetos arrived.  For completists, this has been a wonderful excuse to revisit the set (and yearn for a box set with universal sizing).

The opening of Pagetos (morning frost) is directly connected to the end of Kapnos, as the introductory sounds of “Ground Frost Breeding” are extremely similar to those of fire.  But Pagetos quickly breaks with its predecessors via the introduction of clear, unadorned melody.  This concluding installment is presented by Matteo Uggeri, Luca Mauri and Francesco Giannico, who embed field recordings (such as footsteps on frost) in a modern classical suite, providing a definitive bookend to the series.  While piano and guitar provide the primary sounds, guest stars contribute violin and cello, and Uggeri’s trumpet conquers the sound field whenever it appears.  One wonders if the collective (over a dozen strong when all are counted) knew all along what they were building to, or if the trio simply decided to lighten the load at the end.  As much as Kapnos is about destruction, Pagetos is about rebirth, as evidenced by the clarity of the composition, the brightness of the timbre, and the concluding track, “Melt”.  This is no longer the sound of the hermit (Erimos), the philosopher (Nefelodhis) or the mourner (Kapnos), but of the prisoner set free.  The six selections flow as one like winter flows into spring, chronicling the inevitable tumble into warmth, the awakening of the seeds.

When listening to all four in succession, the scope of the project is revealed.  The release pattern might have been a little haphazard, but the end product is a sonic symphony of sounds as diverse as their subjects.  In order to succeed, the four installments had to sound distinctive, and they do; an additional bonus is the progression from abstract to melodic and from (seemingly) improvised to composed.  Each entry stands on its own, but together, the Between the Elements Quadrilogy is a remarkable achievement, an ambitious project that delivers on its initial promise and should easily stand the test of time.  (Richard Allen)