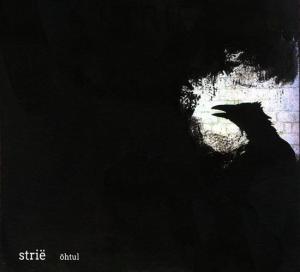 Sometimes the only way to get everything right is to stop trying.  This surrender lies at the heart of Õhtul, an album of immersive beauty that neither bows to convention nor rails against it.  Strië (Iden Reinhart) tours the world with various ensembles, and she arranged the strings for Greg Haines’ Digressions, but on her own, she wears the slippers of evening and mist.  When one had had too much of this world, one has no choice but to give in or create another one, and Strië takes the latter path here, decorating her walls with musings, lamentations, and tiny wishes: tiny because they lack the strength to risk large disappointment.

These songs lack playmates.  They’ve been invited to other houses, but haven’t fit in.  “Play hopscotch with us,” the other songs say.  “Mimic our cadence.  Learn our rules.” But the tracks of Õhtul respond, “Look at the pretty chalk!  See how it flecks!” and “May I color in the spaces between your words?”  This isn’t a rule-breaking album, it’s a rule-indifferent album – not purposely contrary, but confused that others don’t understand.

Much has been made of the “mystery” of Strië, and the deluxe packaging of Õhtul – lovely and mysterious itself – amplifies the adjectives.  The outside may be blank, but the inside bursts with color, thanks to a series of cards, including one of a hot air balloon.  There’s even a puzzle of Strië that the recipient can put together: an obvious metaphor, but fun.  One wonders what the artist thinks of all this.  For the public to “celebrate the mystery of Strië” may be as dangerous to the artist’s reputation as mainstream acknowledgement.  The same threat has faced other women known for their quirkiness, such as Björk and Zooey Deschanel, whose public-drawn boxes have distracted from their tremendous talent.

There’s a heart-rending quality to much of Strië’s music, apparent in the downcast strings and low-pitched vocalizations of “HÑllilaul” (“Lullaby”) and the counter-balancing melodies of “Arabesque”.  It’s unusual to be drawn into an album with sadness, but the clouds part a bit at the end of “Arabesque”, with piano, electronics and an additional pair of string sequences: like catching a glimpse of the moon before it disappears again.  Elsewhere, swaths of forlorn sounds mask deeper elements: distant hammering, classical loops, a xylophone.  Some sounds have been reclaimed from older sources.  Most are new, composed for the occasion.  But no matter how dark the evening gets, the artist remains tender, as if to acquaint a younger loved one with the dark, but not to frighten.  Any hints of hauntology are likely unintentional; This Mortal Coil’s Blood makes a better reference point.

Õhtul attempts to guide the listener safely through the night, a time in which the liminal creatures emerge and shadows melt into a thicker darkness.  The crackling of leaves and secret stirrings preserved within these pieces speak of deeper truths, of bigger secrets – not “Who is Strië?” but “Who are we?”, encased in a world we often ignore when the sun goes down.  The inability to tell field recording from percussion and pure voice from pitch-shift adds to the disorientation.

If Õhtul were not out of step, it wouldn’t be as effective.  We often ignore what we understand and dismiss what we don’t, but Õhtul has elements of both.  As such, it’s impossible to abandon; it’s the word we’ve forgotten, resting on the tip our of tongue.  Õhtul is not an album of darkness looking for the light, nor an album of darkness that folds in on itself.  It’s an album in which a person’s darkness is a fox or an owl’s light, and it invites us to see the forest through their eyes.  (Richard Allen)