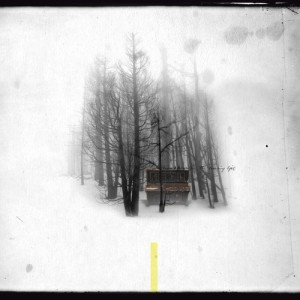 Many people describe instrumental music as being “cinematic” or as “the soundtrack to a movie that has never been made”.  These commonplace nods to the largest entertainment industry ignore a more obvious description: the soundtrack to a book.  As a diligent reader, I can attest to the fact that the music we review makes an excellent accompaniment to almost any book, fiction or non-fiction; but that certain albums match certain books so closely that the similarities seem intentional.  Nicholas Bernier‘s Music for a Book was written to accompany Marc-André Moutquin’s Entre l’aurore et la nuit, which takes place in Nunavek; Bernier’s cold expanses provide what would seem to be a perfect score.  Soft drones drift like fields of white; footsteps echo in the snow; distant bells ring like the sound of rescue.  And yet, these sounds also seem to match the drama of other literary works; I’ve yet to find a book that doesn’t seem right to be read while sampling these sounds.  While listening, it’s energizing to imagine the expansion of such a genre: book soundtracks, created either as chapter-to-chapter accompaniment or as full-book scores.  Were such an idea to catch on, a huge market might suddenly open for instrumental artists, as the number of books produced every day dwarfs the number of films produced every week.

Music for a Book is the better of the two discs here, partially due to its concept and partially to its mysterious nature (why is it raining?  what is that clicking?  how far away are those dogs?).  But it was the second of the discs to be produced.  Music for a Piano was ready a couple years ago, but Bernier decided to hold it back for “further development”.  The album was inspired by the time Bernier spent in residency at a program in the Rockies, playing a piano in a cabin surrounded by crickets.  This unique setting led to other subverted expectations.  On Music for a Piano,  the instrument is played in a playful fashion.  The album’s first notes are wooden and toneless; the innards seem to have been prepared and miked.  Field recordings contribute a sense of place, while occasional vox, violin and glockenspiel round out the sonic spectrum.  One can imagine the isolated artist, tapping the keys from different angles, oblivious to the elements and the cold.  The static of the second movement might well be that of a shortwave radio, the sound of concerned family members trying to break through.  Ironically, this album also works as “music for a book”, creating a momentary anxiety in the listener, who may be led to eject the discs to confirm that the right one is being played.  At times, Music for a Piano sounds more like Music for a Music Box, especially at the opening of the third movement, but this only demonstrates the breadth of possibilities still available to the artist, and to any others who may follow in his footsteps.  When paired together as a two-disc set, Music for a Piano/Music for a Book provides ample room for debate: can any sound, in the right environment, be considered a score?  And if so, what does this mean for the instrumental music industry?  (Richard Allen)