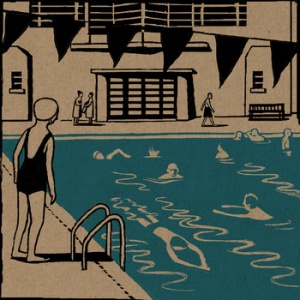 “Summer is almost over!”  This lament has been picking up steam in recent days, but it’s not entirely true.  Technically, there’s still a month of summer left, even if school has already begun in some parts and vacations have ended.  And many weeks of jacket-free days remain.  To some, summer ends on a specific day – Labor Day in the States or the autumnal equinox on September 22.  Meanwhile, the Aussies are just starting to look forward to their summer.  And then there are those to whom summer is a state of mind: the “endless summer” of surfers, the summer of a heart or of a life.

Lido is a celebration of a particular part of summer: the enjoyment of Britain’s open-air swimming pools.  And yet, it isn’t simply an album to play in summer; it’s one to put the mind in a summery mood.  However, this is probably the best time to purchase the disc or the clear blue vinyl, to enjoy while all the elements are in alignment.  (The editions are also very limited.)  Those familiar with the pools referenced by the songs and illustrations may feel tingles of joy and nostalgia as they recognize familiar childhood locations, some of which have since closed.  There’s a certain sadness in seeing the obituaries:  The Knap Lido, Barry, Opened 1926 – Closed 1997.  But there’s clear pride in seeing the survivors, as well as one recovery (London Fields Lido, Reopened 2006).  Although restricted by size and therefore not quite comprehensive, Lido still serves as a historical document of a nation’s pastime, and the care given to the physical product is a testimony to the importance of the subject.

Darren Hayman‘s music covers many forms of ambience and occasionally ventures into electronica.  Each track is dedicated to a particular pool and conveys an emotional connection.  Some of the best moments occur when we hear the sound of children splashing and laughing – the quintessential pool sound, without which the recording would be incomplete.  “Parliament Hill” contains what seems to be the sound of a shower, signaling the end of a visit.  Opening track “London Fields” contains one of the album’s most buoyant melodies, perhaps reflecting the ebullience of a re-opened pool.  But the tracks dedicated to closed pools are slower than their siblings, and almost mournful; one can’t help make the connection to their demise.  These tracks dominate the middle section of the album, and are followed by “Tinside”, whose glockenspiel and synthesized handclaps are as clear a demarcation as any lap lane marker.  The closing piece, “Tooting Bec”, is the only slow track written for an active pool; its melancholic nature is likely a reflection of summer’s end.  But then again, with memories translated into music, perhaps our own summer can be endless as well.  (Richard Allen)