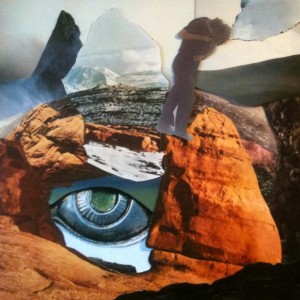 A hard drive crash is responsible for one of the year’s most fascinating releases.  If not for this technical disaster, Byron Christoloudou (Golders Green) would not have been forced to rewrite his material from scratch, and the best parts of this album might never have been added.  Ghosts of the former album lurk in the suite’s subterranean levels, as important as the additions, yet all the more mysterious due to their recovered, damaged status.  The surface drones may be primary material or file echoes; the permeable borders add to the allure.  “mvolpot II” even contains the ugly sound of a failing disc, which may cause listeners to sit up and swear, thinking their iPods or CD drives have failed.  The irony:  this is a cassette.  While vinyl skips have been used extensively in modern recordings, it’s rare to incorporate a modern glitch in an older format.

The new material is the meat of the album.  Christoloudou writes that he was influenced by “Afro-American Gospel choirs, Romanian liturgy, Byzantine hymns and the bells of Notre Dame”.  As lovely as these influences may be, the artist also admits that his Greek Orthodox upbringing left him with a feeling of religious alienation – a sad and all-too-common experience.  The disparity between the purity of intention and the disappointment of execution lends this recording its intensity.  When the choirs sing, when the priests chant, when the organ pipes fill, the ear automatically strains in hope of holiness.  But then the drones, the glitches, the volume reductions cloak these sources; even the bells seem a bit off-pitch.  Such distortions reflect centuries of distorted teaching, the human warpings that rob religion of its power.  And yet, despite the fact that the teachings – and by extension, these sound sources – are distorted, they still contain an undeniable allure, filtered yet intact.  One wishes for religion to be pure, but realizing it is not, one continues to hold tightly to certain precepts: grace, redemption, transcendence.  The Christian Church in particular is to many beautiful, yet scarred; some may discard its teachings, but remember what it was like to believe in a vision so fair.

Golders Green itself is a diverse London community, packed with synagogues and churches (a Greek Orthodox church among them), as well as a Hindu temple.  Over the course of the past century, the Christian influence has been reduced from prominent to merely present.  And yet, despite the area’s cosmopolitan nature, the bells still ring, the prayers are still recited.  If only in echoes, the original hopes of the founders still exist, like music once thought lost, then recovered.  (Richard Allen)