The second installment of our guest list series comes from artists who have contributed to our mix series, or that were interviewed for my  column Sound Propositions.  Like Joe Cocker here, we get by with a little help from our friends.

Machinefabriek (Rutger Zuydervelt) remains one of our favorite artists, and luckily for us also one of the most prolific.  His trilogy with Celer was so successful that we asked the two to list each other’s favorite releases.  (Read those here).

Other highlights of the year include performing in Riga [Latvia] (amongst many other great places), touring with Celer, recording with Michel Banabila and Jaap Blonk, making an installation for the NAI (Dutch Architecture Institute), working with Sarah Payton, the premiere of Chris Teerink’s Sol LeWitt film (with my soundtrack), seeing Swans live and getting a cat.

Enrico Coniglio is a guitarist, environmental sound recordist and sound artist from Venice, Italy. A  member of AIPS – Archivio Italiano Paesaggi Sonori, Coniglio has a marked interest in landscape aesthetics which manifests itself in his audio work as well as his photography.  He also co-runs the Laverna and Galaverna labels, and has contributed to Herion as well as many other groups.  Along with Alessandro Doni, he recently published “noWHere – an ideal manifest for sound artists,” which I am presently translating into English.

Considering the huge amount of music produced, even within a niche as
one of the “experimental” music, it seems difficult to decide which
are the best releases in the year, knowing full well that you cannot
listen to everything that come out, as it is impossible to draw up an
exhaustive list. So, I chose the titles below according to a few
simple conditions:

I apologize to all those I have not included in this brief “shopping
list”. I would also like to point out that the relationship between
numbers and the releases listed is arbitrary, I’m definitely not able
to say what is the best album of the year. But I’m sure that, in the
face of too much music produced, artists and labels should make a deep
reflection on the problem of what is called “market saturation” and
respect to the limits of the “growth” as an economic and cultural
model, nowadays clearly in crisis.

SEC_  is  Mimmo Napolitano, the guy behind Toxo Records and many related musical projects, including Aspec(t).  Hailing from Naples, Italy, one of my favorite cities anywhere in the world, his idiosyncratic music perfectly encapsulates the tension between chaos and order that defines that city for me.  Testacoda, his recent collaboration with Jerome Noetinger on Bocian Records, was a highlight of 2012 for me.  Here are his. 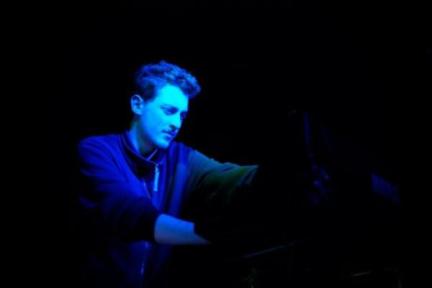 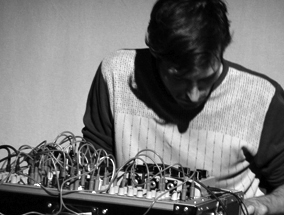 It seems wrong somehow to give STEVE RODEN
a brief introduction.  His work as an artist incorporates a wide variety of practices, from painting to sound work to translating poetry from languages he can’t understand.  I met Steve at Montreal’s Suoni per il Popolo festival earlier this year, and we carried on a massive dialogue afterwards which will soon be published in two parts for Sound Propositions.  Considering he’s the pioneer of the ‘lowercase’ style, I’ve left his best of is his own style.

performing with stephen vitiello in the rothko chappel, waking up at 5 am and driving with damien simon to a small chapel in monfort sur meu to make recordings of a pump organ and celesta. performing with seth cluett in canada, finally meeting and performing with: mathias delplanque, lawrence english, and hearing france jobim remix my installation… meeting the sound pocket people in hong kong, being part of a sound installation with richard chariter, robert crouch and yann novak. performing with glenn bach while watching a man with blue colored sweat… seeing faust live for the first time, the plethora of new vinyl, especially celer, machinefabriek, and vatican shadow. buying a ton of old 45s from all over the world; having richard gere pimp my book of old music photos… and standing in the record store not able to figure out which music should be purchased on vinyl, CD or download – and finally, my first cassette release since 1990!

Dennis Huddleston aka 36 inaugurated our mix series and set a high bar for those who came after.  As if Hollow and Hypersona weren’t good enough, he truly out did himself with his latest LP Lithea.  Cassette connoisseurs may be adviced to check out his tape series, but unfortunately they’re long gone by now.  Luckily you still have these lovely sounds to sooth you.

Jara Tarnovski  is a member of the excellent Czech group Gurun Gurun, and his mix of Czech and Slovak experimental music remains one of our most popular mixes. 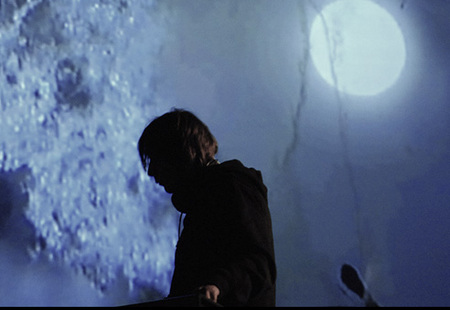 Alex Gray seems to have a project for every day of the week.  He releases beautiful chill out music as Deep Magic, crazy fucked up collaged beat driven music as  DJ/Purple/Image, is a touring member of the Sun Araw Band, and more mix tapes than I can remember in 2012 alone. Alex also creates the artwork for his tape releases, running the art-centric label  Deep Tapes to put out limited releases of works by himself and his friends.

mirror to mirror -body moving slowly
empyset
dak – leaving tape
top – tape
matthew sullivan + sean mccann record
sun araw – inner treaty
silent servant mnml ssgs mix
farrah abraham – my teenage dream has ended
the homies in
l.a. , oakland, moscow , berlin australia , mexico , oxnard ////
The anonymous drone artist Black Swan quietly appeared on the scene in 2010 with In 8 Movements, followed the next year by The Quiet Divide.  In 2012 he’s shown no sign of slowing down, or revealing his identity, not only releasing two stunning LPs (Aeterna and Heaven), and collaborations with site favorites 36 and EUS, but also an outstanding mix for us.  Read more from BS here.

Absolute favorite albums from 2012:
As shocking as some may appear to you, the albums listed below have been added to my imaginary and contradictory ‘Number One Favorite Albums of all time’ list, having been released in 2012. They’ve all have been played loudly, numerous times a day, for the passed year. Some ambient, most not. Absolute best new music I’ve heard this year and in general, hands down.

Film Releases:
Beyond the Black Rainbow
I can’t stress how much I love this film- it’s become an obsession. Panos Cosmatos proved himself as an extremely talented director. Jeremy Schmidt’s score and music was a perfect match, just beautiful. Though technically released within the festival circuit in 2010, its 2012 official release gave the world a brand new new cult film, which could’ve been passed off as thirty years old- completely worthy of the term ‘cult’. This is the kind of movie I’ve been awaiting for many, may years. To me, it’s atmospheric, surreal, visual, nostalgic and perfect in every way. I really hope 2013 sees a soundtrack release on vinyl… (A must see for any Boards of Canada fan, as well).

Being in the post production end of film, I had a chance to do some work on Lynne Ramsay’s ‘We Need To Talk About Kevin’, released in 2011. A heartbreaking film, presented flawlessly starring Thilda Swinton, who many could swear is actually Thom Yorke : ) Great film, a must see for sure.

I can’t stress how much I love this film- it’s become an obsession. Panos Cosmatos proved himself as an extremely talented director. Jeremy Schmidt’s score and music was a perfect match, just beautiful. Though technically released within the festival circuit in 2010, its 2012 official release gave the world a brand new cult film, which could’ve been passed off as thirty years old- completely worthy of the term ‘cult’ in general. This is the kind of movie I’ve been awaiting for many, many years. To me, it’s atmospheric, surreal, visual, nostalgic and perfect in every way. I really hope 2013 sees a soundtrack release on vinyl… (A must see for any Boards of Canada fan, as well).

Matteo Uggeri aka Hue topped out modern composition chart this year with Pagetos, his collaboration with Luca Mauri and Francesco Giannico.  In addition to numerous collaborations (such as the Remote Control project with Luca Sigurta and his unique work with Bob Corn), he’s also a member of the group Sparkle in Grey.   Read more about Uggeri’s work in Sound Propositions 02.

Albums:
BEST ALBUM OF THE YEAR: Larry Yes and the Tangled Mess – The Next Wave of Omnigalactic Peace Warriors

Discovers of the year (but dated later):
Sven Kacirek – The Kenya Sessions
Ben Frost – By the Throat
Jon Lajoie – Every Normal Guy

and for the concerts:
Luminance Ration – Live @ Macao November 2012

Concerts:
Andrew Bird, live in Milan, November 2012
many unknown artists listened in the island of Bali, Indonesia, playing their gamelan

Experiences:
Playing at the “Shake Your Soul” festival in San Martino Spino, where my friend Tizio usually organizes his “Musica nelle valli” festival, that this year had to be cancelled due to the terrible earthquake that hit that area. We made this little new festival to gather money for that area, and we got a lot of fun.
The last Tagofest in Marina di Massa, which was the most important festival in Italy for very underground music. Now it’s over, after eight years.
I know is a bit self-referential but… recording a new album with Sparkle in Grey in Andrea Serrapiglio’s BadInstruemnt Studio – An unforgettable lovely great experience. 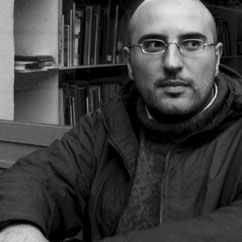 Giuseppe Ielasi is simply a master of his craft.  In addition to a solo LP that is amongst his best and his third LP as Bellows collaborating with Nicola Ratti, he has several very exciting collaborations in the pipeline.  Ielasi’s Senufo Editions labels has continued to release top quality work, and he’s mastered many of our favorite releases this year as well.  I recently interviewed Giuseppe for Sound Propositions, which will appear early in the new year.

I came across Low Light Mixes on Mixcloud earlier this year.  Curated by Dave, I was immediately impressed by the taste that went into making these mixes, and was unsurprised to learn that Low Light has such a dedicated audience.  I invited Dave to share a mix with us, and he’s produced “Daylight Fades,” revolving around the music of Harold Budd, easily our most listened to mix so far.  Dave has impeccable taste, so make sure you comb through this one especially closely. 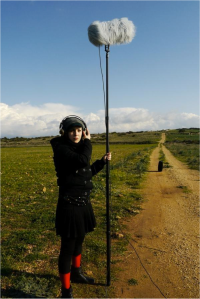 Barbara De Dominicis, besides using her voice, loves collecting sounds, manipulating them and inventing sound textures.  Parallel 41, her collaboration with Canadian cellist Julia Kent, released a CD and DVD this year, a track of which is included in my end of year mix.   Among her current  projects is Exqusite What [as both curator and creator] a collective inspired by the Surrealist practice  of exquisite corpses dedicated to the creation of an audio-visual web platform.  She has recently been  invited by GIRRL [girrlsound :digitalgirrl to curate and produce a series of radio podcasts entitled  ”The Cat Cinderella” with the aim of promoting  the dissemination of works by women artists on the brink between net_art, sound art and audio documentary.  In 2012 she became a member of AIPS.  She will be a future subject of Sound Propositions.