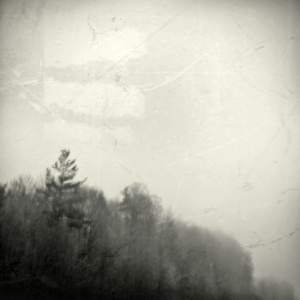 The music of Toronto duo North Atlantic Drift rests directly on the border between ambient and post-rock.  Sophomore album Monuments won’t get anyone’s head banging, but neither will it allow them to nod off.  By straddling both genres, the duo should appeal to fans of each.

As a follow-up to Canvas (reviewed here last year), the new album seems more confident and streamlined, evidence that the two artists, formerly in different bands, have settled into a smooth repartee.  Further evidence of this progress is the inclusion of album highlight “Scholars of Time Travel (part II)”, which continues themes introduced on last year’s single-track EP of the same name.  That piece, a quarter-hour drone meditation with piano, was specifically designed to get people to fall asleep; at nine minutes, with added drums and guitars, the new piece seems designed to wake them up.  Like all of North Atlantic Drift’s music, it’s comforting, but it’s also uplifting; when the glockenspiel enters at the halfway mark, a beaming smile cannot be far behind.

On other tracks, especially the measured opener and closer “Passing Time” and “Sun Dial”, the duo demonstrates their love for influences Hammock and Stars of the Lid.  The music assumes a stately pace, veering away from post-rock by pumping up the ambient washes and elongating the space between notes.  Each contains an extra effect, the former like cutlery and the latter the chatter of children.  As beautiful as these pieces may be, there’s a lot of similar music around these days, and a bit more distinctiveness may be needed in order to make a mark.  By blending the aforementioned genres, the title track performs much better, gently morphing over the course of seven minutes from gentle drone to soft reverberated guitar to soft, creaking march.  As all of the elements come together, one detects the presence of a clear guiding hand (or four).  If North Atlantic Drift continues in this vein, one suspects that their third album will begin to sound more like them than like anyone else.  (Richard Allen)