Wrekmeister Harmonies ~ You’ve Always Meant So Much To Me 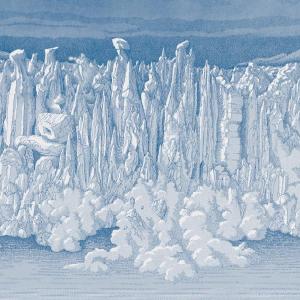 All things truly wicked start from an innocence.

Anyone diving into black metal for the first time cannot tread lightly. Casual fans don’t exist. The world is bound by bleak sounds and strong brotherhood, and newcomers are curious how to resonate with the music. Recently we’ve seen stellar albums that bridge the gap like Wolves in the Throne Room’s most recent (which was even featured on NPR). Many don’t realize black metal’s influence has infiltrated their ears as so many artists incorporate elements into their own music. Some bands owe everything to it. But if one were searching for that perfect gateway that could help guide you in gently, you have found an essential album.

Even listeners who could care less about this realm of sound have to give Wrekmeister Harmonies a go, because this is music of the highest order. Simply put, the 38-minute dark ambient symphony “You’ve Always Meant So Much to Me” is one of the most gorgeous and captivating single tracks we’ve ever heard. J.R. Robinson is the mastermind behind Wrekmeister Harmonies, and originally this piece was written to accompany a film he shot in decimated Detroit locations, the Joshua Tree National forest and decaying forests of Tasmania. That alone is fascinating, and so is the extensive lineup of players Robinson assembled to perform, which includes notables from Leviathan, Nachmystium, Mind Over Mirrors, and Yakuza among others.

You’ve Always Meant So Much to Me begins with delicate ambience and treated wisps of saxophone. Akin to drifting on a boat through a swamp at dusk, this patina is maintained for a long spell, with plenty of subtle changes and understated entrances by other instruments (the grinding of cello bridges, effervescent guitar feedback, synthetic textures, plucks and thrum). While it carries a mournful tone, it is warm and comforting. Still, listeners know something big is coming.

The turning point comes 13 minutes in with an eerie, sustained cry of an organ and, unexpectedly, a harp. Never before has harp been used to ground a black metal orchestra like this. Were the fearsome Charon greeting us at the River Styx, the harp would hold our hands. Guitar drones rise in volume to join a chorus of violins, black clouds, organ expansion, and voices from the heavens. The harp is there, like a mother figure, comforting as the storm burgeons and the inevitable approaches. Through the harp, Robinson’s “You” in the title resonates as someone who was always a stable figure in one’s life, a feminine beacon to connect with when the darkest moments of life consume.

When the nocturnal buzz of guitars boils over, the drums, sky-scraping shrieks and full chords claim the lead. This moment, even though we know it’s been coming all along, is nothing short of awesome. A lot of music listeners say they like metal, but not screaming. This album invites any nay-sayer to give another listen. The shrieks are wild and heart breaking, fighting for life to stay on top of the avalanche of guitars and drumming. This is utter catharsis. This is life embodied in the most primal of sound. All the while, the harp is there, the rock we cling to as the river tries to claim us. Wrekmeister Harmonies are kicking off this album’s release with a performance in the Bohemian National Cemetery of Chicago, and, wow, what a show that would be. When the last plucks of harp signal the end, it will be hard to applaud. This piece feels like the perfect death, if you could plan one. I think a motion of gratitude would be to just lie down and sleep ’til dawn. (Nayt Keane)

Wrekmeister Harmonies – You’ve Always Meant So Much to Me from Thrill Jockey Records on Vimeo.