Nick Pittsinger’s time-stretched demolition of Justin Bieber’s “U Smile” drew a great deal of attention a few years ago, sounding to many like the work of Sigur Rós. Pillowdiver‘s newest outing travels a similar path.  René Margraff’s subject (or target) is a quartet of tracks made famous by Australian artists: “Back in Black” (AC/DC), “Down Under” (Men at Work) and “Misty / Devastated” (possibly Casey Donovan’s “Misty Blue” and Sam Clark’s “Devastated”).  These pieces stand on their own, but together they serve as a commentary on sound and stardom.  Pillowdiver presents the extracts of hit songs, but makes them unpalatable to pop audiences; in so doing, he makes them attractive to us.  From this we learn that we really do like the elements of pop music, just not the way they are presented; and pop audiences might say the same about drone. 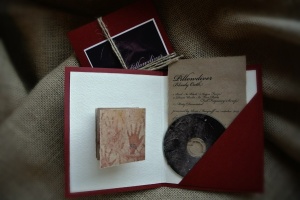 Subliminal forces are in play; fans may be drawn in without knowing why.  “Back in Black (Angus Freeze”) is downright gorgeous, slowed down and stretched out, an elegant meditation mined from metal soundbytes.  While the original version possessed an undeniable power, it was overt; this “remake” raises the volume incrementally, a slowly-tightening vise rather than a bludgeon.  In similar fashion, “Down Under”, a song as iconic as Crocodile Dundee, loses its humor (no more vegemite sandwich) but gains a strange sadness, which followers of Men at Work may associate with the band’s swift rise and fall.  It’s suddenly new again, albeit unrecognizable.  The components exist as fragments, transformed into zeroes and ones and repositioned in a way unimaginable in ’81.

The Aboriginal culture is referenced through symbols in the interior package, a tribute to notes unadorned.  By moving the music forward through processing, Margraff ironically moves it back as well, to a time when a slow, steady hum was considered a holy ritual.  We’d love to hear an edition from the artist’s home charts; “99 Lüftballons” would seem an obvious choice.  (Richard Allen)