Glaciers ~ Mirrored Through the Ancients 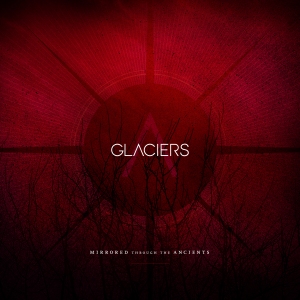 Fans of Big Guitars, rejoice!  The San Francisco band who first brought us the superb And the Sea Won the Battle has returned with an even harder-edged album: loud, catchy, and confident.  But don’t call it post-rock; this is really all-out rock, meant to be heard at outdoor venues where one can take cover when one’s ears begin to bleed.  The limited vinyl edition was red, the regular edition smoke; for where there’s smoke, there’s fire.

Some unintentional humor appears in the press release, as Glaciers calls this “a dark album heavily influenced by life, death, nature, California and all things heavy”.  We’re not convinced that “life, nature, and California” are heavy, and to call this “heavily influenced by (the) heavy” borders on Spinal Tap.  But that’s where the humor ends, and there’s a good chance it’s intentional.  Dark this LP may be – distorted, thick, even murky at times – but not overly serious or self-indulgent.  The long, sweet passages of “Opalescent” lend the album a contemplative sheen, the proverbial calm before the storm.  Otherwise, Mirrored Through the Ancients is an exercise in controlled chaos.

Tempo shifts are a huge factor; the opener alone shifts twice in the first minute.  Muscular drumming and reverberated guitar riffs alternate with melodic interludes until the adrenaline kicks in.  Then it’s fists in the air, boots on the floor, and spilled drinks.  Are people moshing?  Maybe not, but they’re certainly moving.  The drum passage that begins at 5:42 is an invitation to clap in time.  “Pierced by the Sun” begins in a more placid fashion, but eventually erupts with even greater force, while “Veil of the Phoenix” breaks the brake pedal and tosses it out the window without a backward glance.

With one sea album and one fire album completed, we suspect Glaciers will tackle air and earth to form a quadrilogy.  With quality this high, that’s one boxed set we’d love to own.  (Richard Allen)