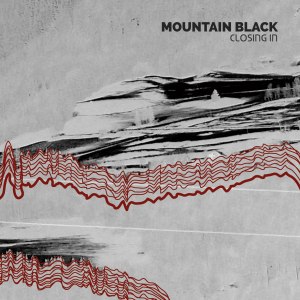 For sixty seconds, Closing In is a pure, bucolic field recording: wind, birds, passing traffic.  But at 1:01, odder sounds enter the mix, sounding like a splice of thunder and train; and only 37 seconds later, they disappear, replaced by footsteps and the voices of a man and child in a tunnel.  What is going on here?

Mountain Black (Melbourne’s Martin Kay) is not just a field recording artist; he’s also involved in installation and soundtrack work.  Closing In represents his multi-perspective approach, a blend of field recording, found sound and post-processing.  The result is a purposely disorienting work of sound art, unmoored from any discernible narrative.  This approach succeeds in its stated objectives, although the same factor that makes it succeed also restrains its impact.  It does sound like a film score, as the composer intended, but it needs either an accompanying film or a clearer structure in order to lodge into the long-term memory.  “They are simply places Martin Kay encountered”, reads the press release, ignoring a basic premise of writing:  be specific.

Once the listener is freed from narrative, he or she is able to listen simply for context and contrast.  The crisply-miked brush fire in “Diagetic” burns among some incredibly non-plussed insects and birds.  The minute-long “Waiting Room” proceeds from hum to rain before the two are combined in the subsequent track, a clear sign that this is more a single work than a collection of pieces.  A long stretch of relative quiet (which includes a television show – shades of The Wall) is broken midway through “Non-Diagetic” with human rustle and electronic drone before returning to its roots.  The album’s most effective piece, “Silver”, builds upon this noisier base with bubblings, creaks and sampled orchestral scales.  At this point, the sounds do indeed seem to be closing in, and Kay’s strength lies more in such layers than in his subtler explorations.  (Richard Allen)