When it comes to the year’s best packaging, the “wow factor” is a must.  The design of these releases is so good that their music seems almost secondary.  We are enthralled first by sight, then by sound.  If we were still in school, these are the releases we would bring to Show and Tell.

Packaging awards differ from album art awards in that they honor the format of delivery and/or the inside of the package as well as the outside.  Without the benefit of seeing these releases in person, one might never encounter their beauty.  Some possess a tactile appeal; others include essays or ephemera.  While most are limited editions, many are still available: a little miracle that won’t last long.  The following releases are listed in category order and each one is highly recommended. 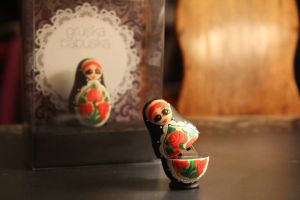 The USB stick is a tiny marvel that can hold a great deal of information.  When it came time to release their debut EP, Grúska Babúska created a buzz product by embedding a stick in a nesting doll.  Then they put each one in a rectangular box that made it look like a toy.  The music is just as fun; the concept works because the sound is just what one might expect upon seeing the doll.  At this writing, a few copies were still available at Reykjavik’s 12 Tónar; any restocks will likely be offered through Norman Records.

Michiel van de Weerthof has been around for a little longer, but his latest effort is another marvel that combines the old and the new.  Out of Control is an EP on a USB stick cooked into a homemade bar of soap.  Only 50 copies were made, but one can appreciate the time and love that went into such an endeavor.  The music matches the appearance, as instruments include balloon, bathtub, rubber bands and wooden ruler.  The initial run sold out within a matter of days, but the artist has created a waiting list just in case people are interested in a second run.  We think such a thing would be worth it, so we encourage our readers to get in touch with the artist via email!

The full package includes a sweet piece of white splatter vinyl, but the highlight of Pacific 231‘s Micromega is the business card.  Ben Link Collins (Silent Media) is responsible for this endeavor, which reduces the size of the stick to a millimeter.  One imagines music being distributed in this way, passed from person to person like business cards, stored in wallets for easy dispersal.  Of course, stores might then increase the size of the packaging in order to prevent theft, thus defeating the purpose.  The vinyl contains the songs, the USB stick the videos; it’s a true multi-media, old school/new school package.

What’s in the box?  A well-designed box can seem like a gift in itself, and when extras are added, the recipient’s enjoyment can go through the roof.  One need look no further for evidence than Johann G Winther‘s I Have a Heaven Ending and Weaving Thin Threads of Darkness from the Light that Was Given, on the aptly-named Awkward Formats.  The cassette is accompanied by a set of durable cards, but it’s the latched box with the burnt, etched cover that draws the attention.  Clearly a labor of love, this box feels like it holds a treasure, and puts one in the right frame of mind to enjoy the music inside.

Fescal‘s Two Winter Poems is based on the work of Pushkin, and honors him with photographs, tea, music, and of course the poems, all in a limited edition box.  This hand-assembled effort is a charming release from Fescal and the relatively new Dronarivm label.  As the first flakes begin to fall in the Northern Hemisphere, this is a great time to discover – or re-discover – this wonderful keepsake.  (Note: the candles and large prints in the photograph are not included!)

Wist Records had a great year in 2013, releasing a series of original works while re-packaging recent catalog works in more elaborate forms.  The best of these is Depatterning‘s The Huddled Tone EPs, a trio of CD3″s that includes a soundtrack to a recent film.  The small box also includes a Canadian stamp and coin along with a series of square photos, all related to the subject of the music: the collapse of rural communities in Saskatchewan.  One can feel the sense of loss while listening, but the tactile experience makes it resonate.  Also worth note:  Wist’s similar-sized box release of Porya Hatami’s The Waning Branches, and the label’s jackdaw reissue of Loscil’s City Hospital. 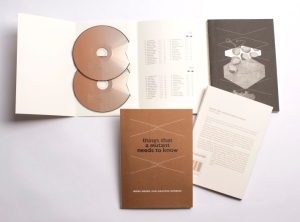 Much of the music we review is inspired by literature, and a strong subsection includes literature.  We’d be remiss if we didn’t mention Wist Records’ ongoing Wistbook series, which continued its run with entries from Christina Carter and Frozen Vaults in November, scoring novellas by Jean Rhys and E.M. Forster.  On a similar note, Richard Skelton and Autumn Richardson continued their exploration of local flora and fauna through a series of chapbooks accompanied by digital and physical releases.  But the hands-down winner in this category is Unsound’s Things that a Mutant Needs to Know, a double-disc collection that offers not only a wide selection of music, but a new collection of magical realist tales, a sequel to a 1956 anthology from Jorge Luis Borges and Adolfo Bioy Cassares.  A huge congratulations to Reinaldo Laddaga for compiling this enormous compendium of word and sound. 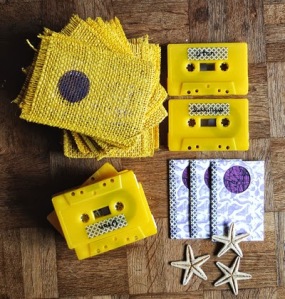 Not every book has to be perfect-bound or ambitious in scope.  Sometimes it’s the little things that attract the eye and heart.  Such is the case with Uton and Sunhiilow‘s Garden & Cosmos cassette, which includes a thatched yellow cover and purple minibook.  The first 15 copies also included sea stars.  I didn’t get a sea star, but the minibook alone made it worth the purchase.  The handmade nature of the release adds to the pleasure of perusing the contents.  One may not be able to remember the label’s name (Om Ha Sva Ha Ksha Ma La Va Ra Yam), but after seeing the package and hearing the music, one will certainly remember these experimental artists.

Two labels have been so consistent in their attention to physical packaging that we pretty much love everything they release.  To no one’s surprise, the labels are Time Released Sound (ACL’s Label of the Year in 2012) and our sister site Fluid Audio/Facture.  Time Released Sound released a number of worthwhile recordings in 2013, but in terms of packaging, Colin Herrick’s wildest, most over-the-top idea was to turn Benjamin Finger‘s Listen to My Nerves Hum into a giant bird mobile constructed from broken piano pieces.  The packaging matches the music, as Finger’s fragile constructions often take on a fractured quality, yet manage to spread their wings to the sky.  Later in the year, we were impressed by Mikael Lind‘s Unsettled Beings; this set included wonderful original artwork from Sigga Bjorg Sigurdardottir.  Both releases are sold out, but newer works are now available!

As for Fluid/Facture, a series of lovely releases were made even more lovely thanks to macro photography on the site, but there’s nothing like seeing one in person.  Clearly the most ambitious (and successful) work of the year was the massive 8-hour CD/DVD/vinyl release of The Seaman and the Tattered Sail, which sold out in pre-order.  This sort of thing is just not common anymore, as a majority of music fans find themselves pressed for time.  It’s a celebration of the patient and thorough, a pure collector’s paradise in an oversized package that set the standard for the label in 2013.