Breath Heart Skin was initially presented as a 21-speaker installation at Brooklyn’s Issue Project Room, but it translates well to two speakers at home, a testament to the mastering and to the power of the original material.  While the press release speaks of “piercingly high frequencies”, “grotesque, abusive atmospheres” and “brutal power”, there’s no reason to be alarmed; these five pieces fall short of doing any actual harm.  These extreme adjectives are not matched by the sound, which falls short of true extremes.  The high pitches are indeed high, but pleasantly so, like high-strung birds; the low rumbles are indeed low, but cavernous rather than engulfing.  In short, the album is more music than noise, more attraction than repulsion, which is a very good thing.  The physical art – a 20-page booklet of cloud photographs taken from the artist’s Brooklyn apartment – bleeds into the aural art, as the listener hears reflections of passing clouds, from wispy stratus to menacing stratocumulus, in the upper and lower registers.  An artist known for his extremes (a past exhibit contained his own fecal matter) is now demonstrating restraint. 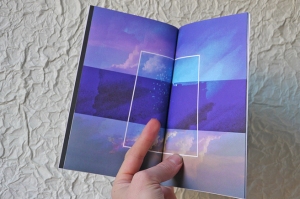 Does this mean that Doron Sadja is mellowing?  Not at all.  He’s merely demonstrating an understanding of the lovely tension produced by holding back.  These active compositions go far, nearly all the way, pulling back at the last moment, at the frequency just before the one that would hurt.  And yet the hungry listener is not left unsatisfied.  To the contrary: the listener is swallowed by a larger sound than one usually encounters, invited to surrender to the sound, breath, heart and skin, and released gently on the other side.

Far too many drone albums are monolithic without intricacy, or textured without nuance.  Sadja’s work is carefully assembled and multi-faceted.  He earns every payoff, yet spends little time in the trough.  Each piece builds until it nearly topples under its own weight, but the juncture points are unclear.  One cannot pinpoint the moments of shift; instead, one is amazed at the lack of seams.

One might view Breath Heart Skin as Sadja’s farewell to Brooklyn, as he has recently departed for a new home in Sweden.  In Brooklyn, he was applauded for pushing aesthetic buttons and given wings to fly.  The tenderness of this recording may be gratitude seeping from his skin, pulsing from his heart and riding on his breath.  The city said, be who you are.  And in return, this final gift.  (Richard Allen)