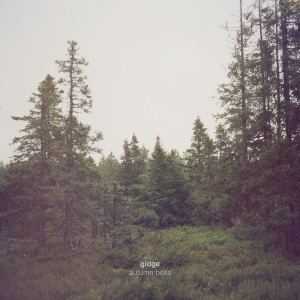 What better way to celebrate the first day of autumn than with the release of an upbeat, autumn-themed album?  Autumn Bells looks forward rather than back, making us miss the summer a little less.  The timing – both physical and emotional – could not be better.

The lead story here is the track “Norrland”, a Perfect Autumn Song.  Anchored by a gorgeous horn sample, the near-wordless track evokes the same mood as Coldcut’s “Autumn Leaves”, which samples Eva Cassidy’s song of the same name.  Wistful and elegant, the track evokes thoughts of long drives, golden hues and the sun shining through half-naked trees.  The music dissolves in the center, folding into fall; but then it rises again, declaring that seasonal mourning is over.  It’s time to look forward to pumpkins, jackets, and filtered light.  The last 90 seconds are a sweet duet of piano and avian song.  Yes, we’re ready.

It’s amazing to learn that this song has been around for five years, waiting to be unveiled.  How does one keep such a secret for so long?  The Swedish duo has been surprised by the response.  But those familiar with Gidge‘s earlier singles “You” and “I Fell in Love” (both included here) will likely view this as a well-deserved success.  Those patient tracks paved the way for this debut LP.  Each includes lovely field recordings and chillwave samples; the silent space that surrounds the rain in the latter track comes across as a gesture of respect.

The best of the album’s new discoveries is the two-part “Fauna”, the first which serves as an overture and the second as the fulfillment of a promise.  “Part I” only has a few beats (samples at the start and finish, like a boat landing on a small wave), building to a rush of bell-like synth (reflecting the title).  In contrast, “Part II” focuses on the beats, the most active found on the album.  We can dance to this.  The other tracks may be peaceful, languid, and unfitting, but this is a Happiness Song.  We’ll trade the summer for the apples, the candy corn, the hayrides.  Happy autumn, everyone!  (Richard Allen)