As hundreds of submissions have poured in over the past few weeks, the staff of A Closer Listen has been drowned in sound.  But with only nine staffers, we’ve had no way to cover them all.  This leads to our first guest column, as Richard Allen rises to the challenge laid down by Jeremy Bye.  (Thanks for the privilege!)

2014 was a pretty good year for electronic music, but 2015 looks to be a great one.  These electronic releases stand out in an extremely crowded field.

Cologne’s Sonae has been recording since 2007, but Far away is right around the Corner (Monika Enterprise, 23 February) is her first full-length.  It’s an absolutely gorgeous set that makes good on the promise of her 2-track 2012 EP Cologne on A Strangely Isolated Place.  That EP set the stage for the new work by laying down a blanket of piano, bells, static and rain.  Only one of the tracks (“Urban Cruising”) contained drums.  Listeners new to the artist should expect that they will be used when needed, but not always.  The new album begins in ambience, with the sweet kiss of “Gewitterspaziergang” followed by the caress of the title track.  The drums hold off until the fourth track.  Not until her remix of Distanz’ “Cio D’or” (originally recorded as part of a theatre production) does the deep electronic nature of this release become apparent.  These patches are meant to enhance, not to dominate.  The cover art belies a deep sadness, but Sonae keeps it in check, content to paint in melancholic hues without drenching the mood.  On the spectacular “Überwindung”, she ties it all together, wrapping a ribbon of texture around a gift box of beeps and bass.  Learn her name now. 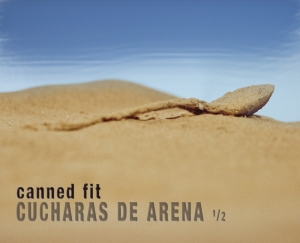 Another female artist making ripples is Austrian installation artist Christine Schörkhuber, known for recording purposes as Canned Fit.  Her latest album on pan y rosas discos is a prime example of the type of vocal album ACL does cover, in that the lyrics take a back seat to the music and manner of delivery.  This is the sort of shot in the arm that could revolutionize the airwaves, if only anyone would listen.  Cucharas de arena is an intelligent, experimental set, marked by questions of how a lyric should be delivered, as well as why.  While less accessible than Golden Disko Ship, Canned Fit still leaves the windows open for listeners to come in.  The whispery, percussive “circling in a square” makes a memorable impression, as do the horse trots, footsteps and deep breaths of “rosia montana.”  By the time the bass checks in, the listener is mesmerized.  When metal sheets and sand can be used as percussion, who needs drums?

Canned Fit’s album ends with the sound of waves, and Icelandic beatmaker Muted‘s debut album Muted World (Raftónar, out now) begins with them.  Field recordings are woven throughout the album, recorded at various locations in Iceland.  As a person who loves field recordings, I’m excited to hear them used in such a way: not just as adornment, but as character.  On “Circles”, these sounds are used as percussion in the same way as they are by Canned Fit; the difference is that this is a much more commercial album.  (For those who were wondering if there would be a dance album in this column, this is the first of two.)  Muted draws from his experience as a remixer (perhaps the most famous client being Justice) to produce crisp, tight tracks whose high and low ends will vibrate the walls and pipes of a large room.  Not that it’s all beats, all the time; an occasional jazz vibe sneaks in, a nod to the smoky after hours club, while a couple vocal tracks provide the best possibility of mainstream success.  But the finest tracks – those that combine beats with the sounds of nature – offer hints of a new genre that hasn’t yet been named.

We’ve covered the work of Deison & Mingle before, as well as Deison on his own; we’ve come to the obvious conclusion that everything this duo releases is going to be worth our attention.  Andrea Gastaldello is an accomplished scorer of documentary films, while Christiano Deison was once a member of Meathead.  This provides little indication of their current sound, save for the fact that it is both filmic and experimental.  Everything Collapse[d] included a Swans cover, while the new album tackles Godflesh; but it takes a while for each album to work up to such moments, which are more like hidden gifts.  Instead, Weak Life (Aagoo Records, 9 February) launches in dark ambience, informed by early industrial music.  The deep, dark bass of “Tangles” is mastered as well as one can dream: as cavernous as an air hanger.  Such clarity produces a sense of cold anticipation whenever the beats drop out, as they do on “Osso Temporale”; one is afraid of what may happen next.  But like Murcof, Deison & Mingle operate more in the field of menace than that of murder, an effective tactic on a sustained work.  The title track breaks the mold with piano and dragged chain, but there’s nothing weak about this life; in all facets, this is a more powerful and consistent work than the duo’s already accomplished debut.

We’ve covered the work of Michael Hann before, but under his other name (Rejections) and in a different category (drone).  Marreck is his more rhythm-based project.  When the first EP, Mechanism, was released last year on Tesla Tapes, we were enamored with the track “Herds”, which was one bassline away from being a club hit; thankfully, that’s the direction taken on the new album Cetology (on Trensmat sub-label Nute).  The drone aspect is still apparent in the thickness of the electronic sounds, bordering at times on dissonance; but a new accessibility is likely to break these tracks into the club circuit.  The shift is apparent as early as the opening track, “Folio”, which contains New Order-esque synthesized drums and a whirling backdrop.  The track still needs a breakthrough moment – it’s more of an advancing dust storm – but we’re hoping for a remix.  “Codex” does have such a moment, arriving at 1:07 when the synthesizers turn to the dark side, and another with a tonal shift at 2:31.  The sound is absolutely massive, no surprise considering the fact that the title of the album refers to the classification of whales.  After this, the track defies expectations by receding rather than advancing, drawing a line to the moody textures of Rejections.  “Luna” is yet another winner, a tug of war between sun and cloud.  We’d still like a few more variations in pattern ~ why not go all-out? – but this is a huge step forward for Hann, and a sign of great things to come.

Sometimes it’s hard to tell how good an electronic album is until one takes the album on a road trip.  Rone‘s Creatures (InFine, 9 Februrary) passes the test.  From the cinematic opener “(oo)”, reminiscent of Deadly Avenger, France’s Erwan Castex takes the listener on a sonic ride that matches the call of the open road (although this is not an album to play when stuck in traffic).  Big beats and famous guests abound; this is one of the most confident records we’ve heard in ages: confident enough to slow down as early as the second track, to allow a lonely trumpet to become less lonely, a soothing voice in a troubled night.  Toshinori Kondo gets the credit for this one, while Bruce Dessner’s guitar appears on “Elle” and Gaspar Claus’ cello on “Freaks”.  But Rone remains in the spotlight throughout, as none of this would be possible without him.  A visual element features strongly throughout the album, thanks in part to Liliwood’s cover art, but also apparent in each track, which seems to tell a story of love lost and redeemed.  Rone credits the birth of a daughter (whose voice is heard on “Calice, Texas”) as responsible for his current ebullience; tracks such as the surging “Oujia” take it the rest of the way.  Belts on, windows open, straight on ’til morning.

Continuing on the theme of childhood, we conclude with an early contender for Video of the Year.  Jilk and Haiku Salut are site favorites, and have now gotten together for the collaborative Periscopes (How Does It Feel to Be Loved?, 9 February).  We absolutely love when our favorite acts find each other, and think that a match site should be created for just this purpose.  Haiku Salut’s playful brass and bells are keenly matched by Jilk’s intricate electronics, and we hope to hear a full album soon.  In the meantime, we have this video, which we hope will go viral.  It’s that good.