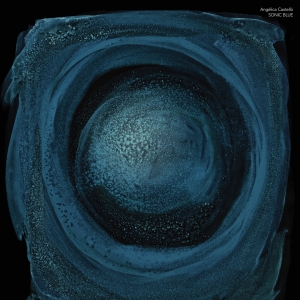 A few years ago I picked up Bestiardio, a unique recording from Angélica Castelló that to this day remains thoroughly unclassifiable.  Sonic Blue may be easier to classify, but is no less fascinating; it’s a (mostly) underwater soundscape enhanced by the sub-contra bass, colloquially known as the supergreatbass recorder.  Originally commissioned for a festival network, Sonic Blue is now poised to reach a larger audience, thanks to this vinyl release.

The field recordings come from Castelló and a small group of friends, who were led around Norway’s Lofoten Islands by a seasoned guide.  When it comes to making hydroponic recordings, it helps to have someone aware of the local sonic sources, in the same way as it helps to have a guide in the Amazon.  Some spots are simply richer than others, and Heike Vester is particularly interested in whales.  While this is not a whale-woodwind recording like David Rothenberg’s attempted clarinet duets, it’s easy to imagine the whales reacting in some way.  The deep tones of the sub-contra bass are particularly suited to such interaction, as they sound like drones, something that only a deep-throated creature might produce.  The 17th minute of the first piece is particularly rich in whale song, as well as the crackle of what may be brine shrimp.  When listening, one imagines the artist blowing the bass into the water (which she certainly did not do), as the arrangement of Sonic Blue makes it seem like a simultaneous recording.  Instead, it’s a soundscape, meticulously arranged.  Early in the piece, we hear the seagulls; later we hear the underwater creatures and the lapping of waves.  This “imagined underwater world” is no less “real” due to its construction; instead, the recording combines aspects of sound to paint a fuller picture.

Consider for a moment the opening sounds of the second side, which come across as comparisons of breath: the artist’s breath through her instrument and the whale’s breath through a blowhole.  Or the deep blue circles of the cover, which suggest pressurized depth, expanding sound or a whale’s eye.  A great mystery lies beneath the depths, amplified by recent studies involving the transmission of whale songs (as opposed to whale song).  As researched by Hal Whitehead and Luke Rendell in the recent book The Cultural Lives of Whales and Dolphins, long songs are learned by entire pods and spread from ocean to ocean, where they are learned by new communities.  It’s exciting to think that we are hearing snatches of such songs on Sonic Blue – not mere signals, but portions of longer works.  If this is the case, Castelló may have more in common with her subjects than she realizes; these records are now leaving the distributor to travel around the world, where they will be heard by new audiences.  And who knows?  Perhaps a whale will imitate a sub-contra bass in a future work, completing the circle.  (Richard Allen)