The more ambitious a project, the more unlikely the chance that it will ever get finished.  When violin and guitar-playing Latvian brothers Maris and Juris Peterlevics (Peter Levics) announced that they would be releasing twelve recordings, one for each month, we held off on our congratulations.  Many composers have tackled such projects, only to fall short.  But now we’re a quarter of the way in, and it seems as if these brothers will come through.  The trick, which they have already learned, is not to try to do it all in one year.  And so August was released last June, September last November and October in February.  If one ever falls on the right month, it will be like hitting the jackpot, but that’s not the point.  This is a fine project that to this point has been executed perfectly well, down to the complementary cover art by Rita Rosenberga.  A decade ago, these might have appeared on a series of CD3″s, but for now, they arrive as digital gifts.

August is the sound of the brothers stretching their wings.  Each track is identified by a date, beginning with 16 August: just late enough in summer that the nights are growing shorter, but not late enough to panic.  This first track is celebratory, with barely a touch of wistfulness; it’s a picnic on the patio, a car packed with vacation gear.  Only the last note hints at something darker, but it doesn’t arrive.  Instead, the brief EP grows slightly more solemn on the 18th before picking itself up ten days later in mid-afternoon.  There’s also a bonus track (“Pre-august”), which the brothers may later regret, as it appears out of order.

September clocks in at only 14 minutes, a nod to the fact that September tends to fly by.  At the beginning of the month, people are at the beaches, enjoying lazy afternoons; at the end, they’ve been at work and school so long that they’ve forgotten the summer.  “10 September” has programmed drums, which provide a bit of variety but are really not necessary; they come across as a distraction because they are simultaneously the most obvious and least distinctive facet.  Fortunately, they disappear with the sun.  The guitar keeps the tempo on the 16th, the violin on the 23rd.  The EP ends with a light echo, setting up the start of the fall. 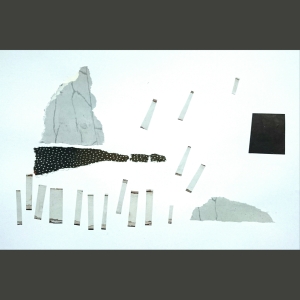 October is nearly as long as the prior two releases combined.  On this release, the brothers seem to have expanded their palette as well.  The pensive “9 October” allows more space between the notes, like that between leaves on the trees.  And for the first time, there’s a surprise: a suspenseful segment at 3:52 that leads to a descending glissando.  It’s clear now that this is the month of Halloween, although (to the benefit of the EP) it’s not a scary release.  “9 October (second) includes a few fragments of spy guitar, while “29 October” contains some of the slowest, sweetest segments to date.  The 26-second “31 October” is a treat (not a trick), with intentionally fumbling guitar and a happy child in the background.  More distinctive touches such as these will go a long way in future installments; we’re already looking forward to hearing how the brothers tackle winter music.  (Richard Allen)