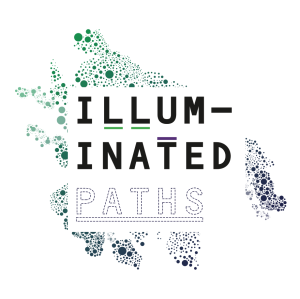 Cape Canaveral is not only the launching pad for the Illuminated Paths cassette label, but a perfect metaphor for the city’s most active venture since the space shuttle.  The label has already released over 75 tapes this year alone, including half a dozen in the past month.  The roster is heavy on synth, but includes all manner of genres, from ambient and drone to modern composition and rock.  The greatest pleasure the label offers is that of discovery; one never knows what is coming next.

In preparing this article, I checked out all of the year’s releases (and of course a few more were released while I was still going through the discography!), and have chosen five of the finest to highlight. 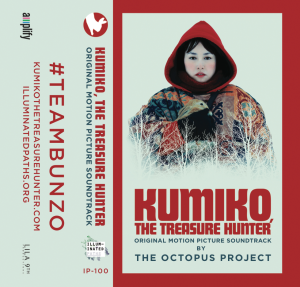 The first, and perhaps most surprising, is The Octopus Project‘s soundtrack to the film Kumiko, the Treasure Hunter.  The fact that the label was able to secure a project this popular is astonishing.  I saw the film in Manhattan last winter, and even then was taken by the score.  The film is heartbreaking: a lonely young woman (played by Pacific Rim‘s Rinko Kikuchi) discovers a VHF copy of Fargo, treats it as a treasure map, and travels from Tokyo to Minnesota to find the cash she thinks is buried in a suitcase by the side of the road.  Separated from the visuals, the score is even more powerful.  The atmospheric nature of the tracks, from the measured cuteness of “Library” to the menacing drone of “Cafe” and “Subway”, is brought to the fore.  The undercurrent of mental illness, slow to develop in the film, is apparent in the manner the tracks veer from gentility to unease, like a mind unable to focus, or the tension between the real and the imagined.  And when asked to convey danger, The Octopus Project obliges, in particular on “Diner Walk”, “Where Are You Going?” and “Ice”.  We cheer for Kumiko, but we also fear for her, and the ending, although seemingly unambiguous, still lends itself to alternate readings.  Not so the soundtrack, which is arrowed in tone, leading to an inevitable conclusion.

KURMA‘s FRACTURE is another dark release, based on an experience with an unmanned submarine drone.  As the artist tracked the drone, it slipped down an oceanic trench to a slow and devastating demise.  The key track is the 20-minute “Dive”, a drone of a different nature, thick and immersive in tone, as claustrophobic as an overcrowded submarine.  When listening to this piece, one thinks of Petrels’ “William Walker Strengthens the Foundations” and We Lost the Sea’s “The Last Dive of David Shaw”, two other extended tracks dealing with aquatic depths.  As “Dive” progresses – or perhaps more accurately, sinks – one can imagine the hulls bending, the rivets coming loose, the metallic implosion and final expulsion of air.  A light electronic beat develops in the closing minutes, filtering down like gratitude from above.  Closing cut “Sweet Death” offers a similarly bittersweet angle, disintegrating into soft electronic shards during its extended finale. 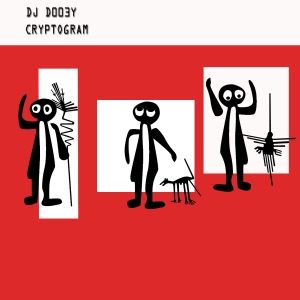 A little joy arrives on DJ D003Y‘s Cryptogram, a beat-happy tape that begins with the invitation, “Come follow me; who knows what you’ll find?”  It’s a calm invitation, more friendly than seductive.  The characters on the cover seem wide-eyed and innocent, the hard lined art hearkening back to the Alex Steinweiss and the great jazz records of the 20th century.  And indeed, there’s a little jazz to be found here amid the electronics, especially when it comes to the toe-tapping delight of “Stephin Merritt Island”.  Other pieces are aimed directly at the dance floor.  “I Like Your Energy” is a single smash in the making, while the bell-toned bonus track “Ice Cycles” seems like the perfect winter builder, perfect for use early or late in a set.  The repeated vocal phrases seem a bit unnecessary, as the music is strong enough to stand on its own; we’d recommend a more laconic effort the next time around.

The Illuminated Paths Special Edition of Lastboss‘ Pattern Docile (Mutations) is another coup for the label.  The original collection is a 47-track, nine volume set, based on an audiovisual installation in China.  Visitors scanned codes found in British artist Lee Prescott’s works in order to unlock Lastboss’ audio reflections.  These ranged from ambient piano (“Supreme Synthetic”, “Mortals Found”) to drone (the knife-sharpening “Hung Friction”) to space age synth (“Dexterous Planets”) to industrial-flecked darkness (“Treasured Hands”).  Through it all, Lastboss creates a sense of mystery that makes one imagine the art that might have inspired it, the mirror image of the art that inspires a score.  The tape makes a great entry point for the project as a whole, as a digestible yet representative sample that makes one curious about the complete project.  For exactly that (and some cool art for Vol. 2) click here.

The Electric Nature is the only one of the artists here to have contacted us separately, not knowing that the label had already begun promotion on its behalf.  We mention this because sometimes artists don’t know what labels are doing for them, but Illuminated Paths is definitely on the ball.  The raucous, rocking Alienation stands out even in a diverse roster, more rock-oriented than most of the music on the label.  It’s no surprise that “Alienation | 1” is the first video single, as it’s a compact 3:48 of what seems like saxophone squall lying atop a bed of battling guitars dancing hotfooted over a fire of dueling drums.  “Alienation Jam” reaches a similar density but is more sprawling in nature, while “Alienation II” begins with a pounding before taking a deep breath and plunging into the abyss.  By the midsection of the 13-minute jam, it seems like an entire symphony of rockers has gathered in a single room, some to tune their instruments and others to improvise.  It’s a celebration of volume that would likely kill in concert, if only the artist were able to find enough volunteers to replicate the magic.  At 9:15, everyone collapses in a gigantic heap, and then the crickets come out ~ an amusing conclusion to a fun release.  These crickets may be deaf, but they’re still chirping.  (Richard Allen)

Congratulations to Illuminated Paths for its countless curiosities.  Be sure to check out the site on a regular basis ~ even more tapes have likely been released since this article was written!