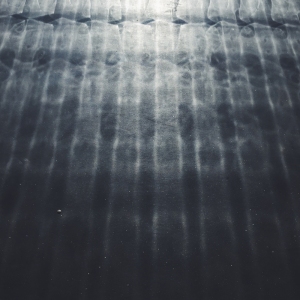 Iranian artist Siavash Amini follows up last year’s fine What Wind Whispered to the Trees with an ever fuller album.  This time around, his guests contribute not only violin, but viola and clarinet.  The result is a sound that is somewhere between drone and modern composition, a very pleasing combination.

As on the previous album, the artist starts with his most aggressive track.  Last year, the track was “The Wind”; this year, it’s “Agarthini”, whose very title suggests its tone.  Sheets of drone are soon joined by low tones, and nearly three minutes along by harsh static.  The volume continues to grow as strings crash the party, but the key moment arrives at the midway point, as bright keys cut through the morass.  This sparkling segment is akin to a break in the clouds that turns out to be only a break, not a respite ~ soon enough the grey comes rushing back in, and eventually even that has turned to black.  We like this sound from Amini; its so un-ambient that it seems like a declaration.

The title track represents a different sort of showcase.  At nearly a quarter hour in length, it’s a risk that pays off.  Beginning with pure orchestration, the piece takes its time to settle in.  The counter-tones of the early minutes are especially lovely.  When those low tones reappear, they provide a sullen contrast.  A third of the way into the piece, the forces are about equal, but fans know what’s coming ~ there go the bright lights again.  At this point, one force is subsiding while the other is approaching; but at the midway mark, both forces begin to subside, honoring the title.  A long, slow center rolls around like a calmed cat, claiming the last of the sunbeams.  As this track bleeds into the last, it would be fair to call it a medley; in this sense, “Blurring Contentment” comes across as the final quarter of the piece, rather than as a coda.  Are fears subsiding, or anxieties, or painful memories?  In the end, the notes begin to separate, to break up like the last of the clouds, leaving only wisps.  (Richard Allen)