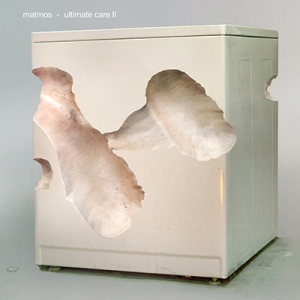 I’m doing laundry while listening to Matmos‘ latest album.  Why is this significant?  Because Ultimate Care II is comprised purely of sounds taken from a Whirlpool Washing Machine.  Upstairs and downstairs, my house is rocking, providing a multi-dimensional experience.

Most people have noticed that their washing machines are rhythmic.  The machines go through various cycles (movements), change timbres within each cycle, and remain remarkably on tempo.  Some find these sounds soothing and may be lulled to sleep.  Others may tap along, in extreme cases (such as this one) treating the machine as a cajon.  Don’t play an instrument?  Hit something.

It’s easy to write that Ultimate Care II is the ultimate washing machine album.  But it’s more than that ~ to these ears, it’s the most enjoyable album of the past year.  Listening brings to mind the comfort of household machinery, the playfulness of children, and the emotional release of the nightclub.  The album is a single 38-minute track, but it’s rife for the remix treatment; after all, washed clothes still need to be dried.

While imitating the time frame of a typical wash cycle, beginning with the winding and ending with the buzzing, Ultimate Care II includes far more cycles than the average washing machine.  No set of sounds continues for more than a few minutes.  The longest is an ambient section that arrives two-thirds in, recalling the period of the wash in which the machine seems to be resting.  Every so often, splishes and splashes remind the listener of the watery base.  Beeps and other tones provide robotic textures, toppling at times into abstraction and rhythm, ambience and IDM.

While the presence of particular guest stars (Dan Deacon, Jason Willett of Half Japanese and members of Horse Lords). is an indication of the variety one might expect, the claim that these artists often do laundry at Matmos’ house is probably tongue-in-cheek.  Still, one can imagine them gathering around the Whirlpool, tapping its sides, straddling its lid, knocking about its guts, collecting little tidbits of sound to take home and manipulate.  The pounding, percussive, stereophonic finale (beginning at 34:31) is especially memorable, an all-out dance party reminiscent of Julian Smith’s “Techno Jeep.”  But by this time, the duo and its friends have already taken a trip through the history of dance music, referencing everything from tribal rituals to booty bass, while including tones that imitate kazoos, xylophones and elephants.

Did any clothes get done?  Likely not, but after this, the load will no longer sound like a chore, but an opportunity.  I’m already looking forward to the weekly wash.  (Richard Allen)