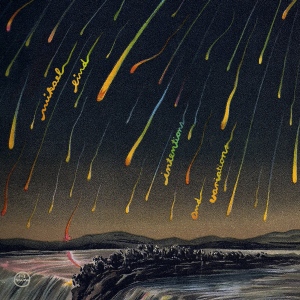 What a cover.  Julia Guther’s “remixed artwork” is the EP’s entry point, making one think, I have to hear this.  Fortunately, the collection is a pure reflection of its cover, sounding like synaesthetic falling stars.

Those who remember Reykjavik’s Mikael Lind from his 2013 album Unsettled Beings may have to reassess their opinions.  That album was a tender, intricate blend of small sounds, while this one starts softly, then expands like the universe.  The first notes provide no indication of the upcoming bloom.  But by the end of the title track, the ivories have been engulfed by a gaseous cloud.  The viola remains, but the electronics descend like a drone.  Gone are the beats, the vocals, the sense of microcosm.  Bell and organ tones continue to exist, yet here they float on the ether instead of glittering on the ground.

This isn’t Lind’s first change of timbre; back on Alltihop, the beats came fast and furious.  But it does demonstrate a new maturation, as the twee timbres of Felines Everywhere are now virtually absent.  Should one peek below the surface, one can still detect echoes, rattling around the cavern like baby bats.  Remove the drone of “Sleeping Pauper”, and one can hear sparkling beneath the shimmer.  But when it comes to tracks such as “Unyielding Rocks”, the feedback levels quash all quaintness: sonic tyrants, dictating their will.

This being said, one of the EP’s sweetest moments arrives midway through “With a Murmur”, as the track honors its title, descending into the silence of deep space.  When it re-emerges, it does so with new resolve.  In the same fashion, Lind has emerged from his own hiatus to craft a gorgeous set of surprisingly different material: a gamble that few composers take, and that even fewer composers execute so well.  (Richard Allen)