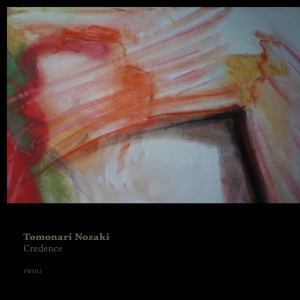 Tomonari Nozaki‘s brilliant triple EP series has been unfolding over the course of three months.  Now that the series is complete, we can step back and appreciate its overall tapestry.  When combined, the parts total 62:16 and form a singular vision; the unified cover art (by Jakob Brondum) adds to the appeal.  We have high hopes for a physical release featuring all three.

Credence is such a subtle work that one needs to turn it up in order to notice the nuances.  On the surface, this is ambient music, but with a more intricate lattice than one might observe at softer volumes.  “Pt. I” is a slow-growing setpiece that borders on drone, with higher frequencies adding a sense of yearning to the mix.  Late in the piece, one begins to detect the light tape wobble: apparent at  8:33 and 8:50, faint at 9:02, obvious at 10:06 ~ keep this in mind, as it will be important later.  The second part is a bit crunchier, like waves on fine gravel.  A drum loop implies the passing of a locomotive.  Together, the pieces imply slow construction: mapping, measuring, building.

Decadence begins with the wobble, displaying the artist’s trump card.  This tiny reveal enables one to see inside the recording.  In this installment, the drone is more apparent, spreading early in “Pt. I” (no original titles here!); the tag calls it “warm noise,” which sounds just about right.  While the drone never quite bursts the boundaries of the speakers, it does nudge the needle to the red.  The cover colors are more diverse, reflecting a wider palette and richer hues.  By the launch of the second part, the timbre shifts again, purposefully wandering in the direction of modern composition.  Mulched orchestral echoes imply brass, strings and even a scissor.  As whorls of sound begins to develop, they push the listener into a more alert state.  This is background music no more.

The trilogy concludes ~ as it should ~ with its finest part.  On Concession, the influence of modern composition is front and center.  The organ tones and sonic surge that close “Decadence Pt. II” are met by vinyl crackle and piano in “Concession Pt. I”.  Had this extended work not been released piece-by-piece, one might not have been able to appreciate such differences, or the way each part of the triptych leads to, and is fulfilled by, the next.  Yet even this is mere prelude to the closer.  If this were a movie, “Pt. II” would be the scene that justifies the ticket.  Remember that wobble?  It’s there at the end of the first part, and subsumed in the second by dramatic strings reminiscent of Nikolai Rimsky-Korsakov’s “Flight of the Bumblebee”.  These are met by slower, darker organ tones, which offset the former by introducing a sense of grandeur.  When listening to this piece, one begins to make connections to earlier pieces, reevaluating them as prelude and foreshadow.  And now the tapestry is complete.  Every step has been important, but the destination ~ this piece ~ is the payoff.  Tomonari Nozaki is to be congratulated for his composition, but Forwind is to be congratulated for its patience ~ the slow reveal created a sense of anticipation, which was rewarded with a stellar finale.  (Richard Allen)