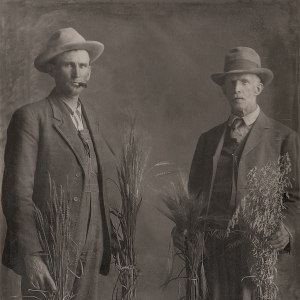 Denmark’s Western Skies Motel has taken a while to break through to our site, having previously released works on Audio Gourmet, Preserved Sound, and (sadly) the last release ever on Twice Removed.  But René Gonzàlez Schelbeck has finally found the cover art to fit his sound, and the two-pronged release to best display his talents.  On Settlers and the bonus (limited) early-bird Generations EP, Schelbeck returns to the sound of 2013’s Reflections while retaining a bit of the looped ambience found on last year’s Buried and Resurfaced and Prism.  The return of the acoustic guitar is crucial, as are the background textures, apparent as early as the wind chimes of opener “Falling Leaves.”  After tinkering with the formula for a while, he’s finally perfected it; these are his finest releases to date.

Credit the Lost Tribe Sound label for creating just the right package as well.  One look at the photos (taken from family archives) and video, and one is transported back to an old American West, dusty and sepia-toned as the impression one might glean from across the pond.  While it was certainly no fun to live in these hardscrabble times, a certain dignity shines forth in the faces of those determined to make a go of it: to build rails, mine for gold, defend their homes from outlaws.  But Settlers is not the sound of danger; it’s the sound of the hard-fought quiet night, the song on the front stoop, the roast in the oven and the pie on the sill.  Even when a light drone approaches (“Two Worlds”), the image remains intact.  The message seems to be: life is hard, but we’ll get through it.

“Whelm” breaks the sonic mold on the fourth track by emphasizing field recordings, harmonium and piano: a wise time for such a shift.  At this point, the album begins to accumulate depth.  As the bass tones grow in volume, one begins to think, confidence, strength, weight.  When the weight is lifted, it seems to have been conquered rather than dropped.  “Transformation” combines both approaches, with the guitar stepping aside mid-track.  This allows that deeper mood to set in once more, a trick successfully repeated on lead single “Whirl” and sustained on the eight-minute closer.

We’re psyched to be able to present the stream premiere of Settlers below; for now, this is the only place you’ll hear it!  It’s a great way to hear what all the fuss is about, and to pre-order with absolutely no risk.  Thanks to Lost Tribe Sound for the exclusive!  Read about Generations after the break.

Generations is the sweet bonus available to early adopters.  This six-track EP continues where the album leaves off; both can be played in sequence without spotting the seam.  The quietude of “After the Storm” leads directly to the light precipitation of “Pouring Down”, despite the clues in the titles that indicate they should be played in reverse order.  The glockenspiel of “Myriads” hearkens back to the chimes of “Falling Leaves”, indicating that the EP is more than just a series of outtakes, while the brief post-rock conclusion bears hints of the artist’s sonic past.  The one-minute coda, “Rise”, brings things full circle, the guitar executing a swift, final fade.  It took the artist a few tries, but in these releases, he’s found that elusive vein of gold.  (Richard Allen)