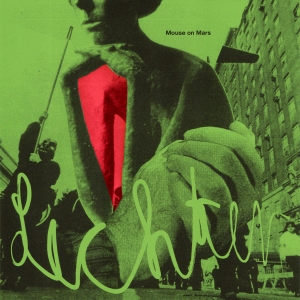 Infinite Greyscale continues its silkscreen vinyl series with another suburb single-track effort, this one a 13-minute percussive creature from Mouse on Mars.  This series has proven an excellent outlet for new creative energies, as the demands of an album are removed, along with the editing pressure inherent in singles.  Add the visual aspect, and the appeal is instantaneous.

While some say that the German duo of Jan St. Werner and Anti Toma needs no introduction, this statement also assumes that everyone who might listen has been around for awhile.  But most of today’s college students were not yet born when the duo released their earliest works in 1994.  Let’s test the theory:  seen this video?  It’s the closest thing the duo had to a crossover hit, as it was featured on MTV’s The Amp, an electronic access point to many of that era.  Play that, then play the clip below; they sound nothing alike.  This is why it may be a good time for a re-introduction; the duo has changed with the times, ahead of the curve back then and still today. 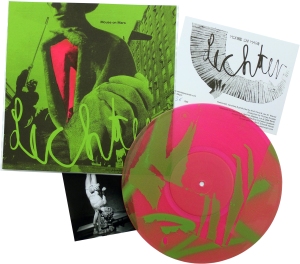 The nearest relative to Lichter we’ve reviewed this year is Matmos’ Ultimate Care II, comprised solely of the effects available in a washing machine.  Like that release, this record never gives up the groove, but morphs along the way, incorporating references to everything from club to krautrock.  Yes, it has a beat, and one can dance to it: hypnotically, consistently, in (or on) ecstasy.  But the best thing about this record is that it sounds like something recorded now, not the work of aging musicians.  It does, however, sound like the work of wise musicians, as age has a tendency to produce wisdom in those who seek it.  Listen to the layers of the recording, or marvel at the use of stereo effects in the final minutes.  Then realize that the composition is the result of improvisation gone wild, then reeled in like a feisty fish.  Additional kudos given to guest percussionist Dodo NKishi, whose rhythmic work keeps the momentum going throughout.  The only downside is that the record lacks the visual component of light bulbs flashing in synch to the music.  For that we’ll need to see the duo live, but for now, we’ve got this groovy record to enjoy at home.  (Richard Allen)