Critter Party looks and sounds like a breakfast cereal ~ specifically, Crispy Critters (although a case could be made for Freakies as well).  It’s easy to imagine these eight tracks as little monsters, colorful and mischievous.  They bubble, they gurgle, they play ~ like Rice Krispies, they deliver the snap, crackle and pop.  Once upon a time, breakfast cereals came with flexi-discs embedded in the cardboard, something Dan Hayhurst of Sculpture might consider trying next time around.  One look at the LP cover and one wants to color it in.

Hayhurst is well aware of how to create a club track ~ he simply chooses not to do so.  These pieces are tangles of patterns that occasionally sort themselves out, but are more often content to exist in a whirl.  The opener and first single, “Vying”, is somewhat of an aberration, as it follows a more linear plane, adding elements as it proceeds (although frequently allowing video game blasts to intercede).  Once all that good will is established, it’s easy to follow Hayhurst through the wormhole.  The shorter tracks are the best, as they seem more like critters than monsters.  “Library Raid” sounds like its title, a bunch of hooligans run amok in the audio archives, fast-forwarding, rewinding, making loops.  “Fern Gang” begins with light ambience, camouflaging the critters until they are ready to emerge.  In this track, the guitar is finally evident, its notes captured in little cages and set free at recess to rattle around with the percussion like loose plastic pieces in a child’s toy. 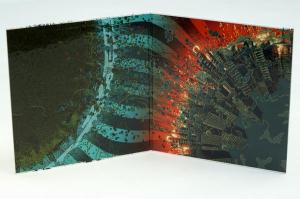 By “Unravelling”, everything is undone.  The teachers have left and the critters are in control.  They beep when they want, warble where they wish, shimmy and smash in seemingly indiscriminate fashion.  But there’s still a method to their madness.  With all the parts operating at once, one might expect an aura of chaos.  Instead, one finds charm.  When for a moment all sounds cease, it’s as if the critters have been busted and look to a passing authority figure, chagrined.  Seeing only a smile, they turn back to their play, content to revel in their imaginary worlds.  (Richard Allen)