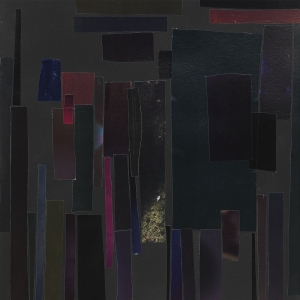 Color is a glorious explosion of dance beats, percussive samples, and vocal layers, close to overload, threatening to topple like a Jenga tower.  And yet, by her meticulous control and sheer force of will, Katie Gately holds it all together.  One of the decade’s most creative artists, she’s managed to translate her avant-garde visions, formerly on display in quarter-hour works, to something even the masses may appreciate.

Let’s face it: pop music is in need of an overhaul, and experimental music can be wonderful, but all too often goes unheard.  One thing that holds pop music back is the desire for a hit; one thing that holds experimental music back is the desire not to cross over.  Gately exists somewhere in the middle, simply making the music she likes.  A lifelong collector of sounds, her former work as a sound editor led her to the reorganization and presentation of sonic sources in an electronic format: field recordings, cartoons, eventually even her own voice.  Her tracks tend to be dense, yet consistently in flux.  Her music operates as a series of moving components, akin to quickly moving traffic or a fluid athletic team, without accident or collision.

Even in the quarter-hour tracks for which Gately has become known, songs ~ yes, actual songs ~ break out along the way, seemingly out of nowhere yet carefully planned.  These explosions rise close to the surface on Color, which contains tracks that might work as singles, “Tuck” being the prime example.  Here her humor is apparent (the word “underwear” always brings a smile), her lines double back on themselves, and her beats are consistent.  “Lift” could be a huge club stormer, as could “Sift”, after the “Beat It” referencing introduction.  But every pop moment is offset by something atypical: a turn of phrase, a sudden burst of onomatopoeia, a shift in thickness or timbre.  More is more, the description reads, and the principle invites repeated plays; listeners will be unable to decipher the architecture of these pieces until they get to know them as friends.  Through it all, Gately preserves an upbeat demeanor, a wink and a smile shining from musician to fan, inspiring a positive response.

The title track closes the album, and showcases Gately as singer, relatively unadorned.  Clocking in at nine minutes, it’s no single; the surprise is the languid build, followed by the purity of voice.  It’s as if the layers served as wraps, removed as one enters one’s home.  “What should I now say to all these days of grey?” Gately sings, proceeding to throw inquiries into the blue and black.  The song conjures memories of This Mortal Coil, especially as the static charges begin to build, draping her shoulders once more.  A beautiful pop song is buried in the center, and for now it’s ours.  But as much as we hate radio edits, in this case we’d be happy to hear Gately cross over.  She deserves it, and the world would benefit from hearing her distinctive voice.  (Richard Allen)