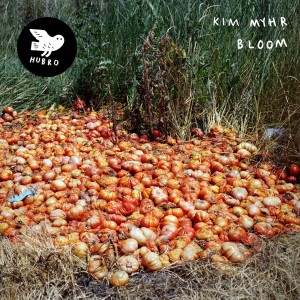 Far from struggling with the different, time-compressed approach often required to produce a second album, guitarist and composer Kim Myhr seems to have relished it. Prominent in Norway’s experimental music scene, with many a band and collaboration to his name, Myhr first ventured solo in 2014 with an orchestral exploration of the 12-string guitar, honed over years of touring and engineered within days. With “Bloom”, his compositional style has switched from the organic to the electronic, from stage to studio.

“Bloom” is redolent with the sense of joyful experimentation, but is all the more impressive for its restraint. Tonally warm and dynamically soft, it lulls you into an unusual yet sincere embrace within minutes. But the embrace rarely endures for long, as a restless energy pervades the set. Opener “Sort sol” moves through six distinct passages mostly under two minutes in length. We hear isolated bubbles of processed guitar notes, synth-like drones that reach out but fall away, warming acoustic chords, overdriven freneticism, fading pulses and – finally – jazz-inflected chords of disquiet. Atmosphere and tempo in constant flux – that wonderful word denoting both change and fluidity. Crescendos promised but never delivered.

“Sort sol” functions almost as an orchestral overture. Exact reprisals never materialise, but its textures and atmospheres are certainly returned to for greater exploration. Much of the album, which totals just shy of 40 minutes, adheres to its oxymoronic sense of smooth dislocation.

Myhr comes across as a DJ of the avant-garde, falling into a groove yet already lining up the next transition. And while grooves particularly are absent, rhythm more generally is a significant part of all tracks bar “Swales fell”, whose spacious, glissando-like 12-string guitar chords render us as still as the waters they evoke. The rhythms are deployed with subtlety and variety. They are the ripples of the ambient, textural “O Horizon”; they are sprinkled in percussive pulses and jagged tremolo chords over “Peel me”; they are in the single chord strummed relentlessly for over half of the 10-minute closer “Milk run sky”, before it disintegrates into a throbbing layer. But Myhr saves one final surprise for the coda: he repeats a section. The chord returns for the final minutes, more distant than before. Appropriately, it fades from earshot. Myhr likely isn’t done yet; he’s just set up a segue for his next release. (Chris Redfearn-Murray)