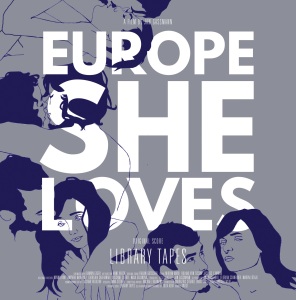 Love, sex, dancing, drugs, unemployment and the immigration crisis ~ all of these are found in the trailer for the film Europe, She Loves.  That’s a lot for a movie to handle, and a challenge for the people who score it.  But David Wenngren is up to the task.  Enlisting Julia Kent on cello, the man also known as Library Tapes (and along with Mattias Nilsson, the founder of the wildly prolific 1631 Recordings), has produced another of the year’s exemplary soundtracks.

Wenngren’s success is in his establishment of tone.  His music is at turns wistful, melancholic, and poignant, underlining the weight of a seemingly inevitable future.  Is the world tilting toward the destruction of personal relationships, the dissipation of love?  And if so, is there something in its flaming out?  “Drugs”, for example, seems like a burden, a disappointment ~ not the glorification one might expect.  And the two-part “Wounds of Europe” doesn’t even need to be heard to be felt ~ the title is enough.  Even though the film wrapped before the Brexit vote, the crushed hearts of young Europeans sprawl across these sounds.

The film is also one of deep, intense beauty ~ flocks in the skies, gorgeous lighting, a reminder of what remains.  And beauty itself, even sad, drowned beauty, is a statement of hope.  The fact that Wenngren and Kent can wring such emotion from their instruments is a testament to European pride.  This is a land of love, and by extension, art, the two spurring each other to greater heights.

Buried in the music is yet another hopeful fact.  Wenngren is from Sweden and Kent from Canada, proof that international collaborations can work, and that despite those who would wish otherwise, the closing of borders is a blow to progress.  The score is an elegy, but it’s also a demonstration.  The longer the tracks grow, in particular the lovely, languid “Sevilla”, the more the mind slowly realizes what it has lost, and turns from reminiscence to action in hope that what is gone is not irretrievable.  (Richard Allen)