Human as Possible ~ We Need 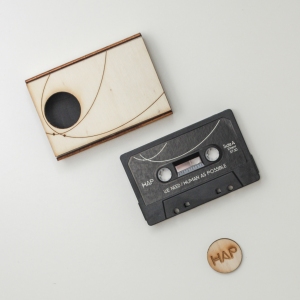 Is this a 75-minute album or a 37.5 minute album?  Both. The tracks on each side of the cassette are designed to be played simultaneously.  While this may seem to some like a gimmick, it’s not; it’s a careful construction that offers a unique home experience.

Some ways to enjoy We Need:  playing one side on headphones, another on a four-channel stereo (now you’re in the middle); one side on a laptop, another on a two-channel stereo (now you’re in the foreground); two stereos, boom boxes or other outer playback devices (now everything is balanced).  A download code is included, as well as unlimited streaming.

I’m experimenting with depth while enjoying the tape: first playing “Extent” in the background and “CONtent” in the foreground.  “Extent” is a soundscape, dominated by synth and field recordings, a moody, undulating piece that seems at times almost sad.  The muted dialogue that enters and exits implies presence at the same time as it implies disconnection.  While it’s the quieter side of the composition, one can adjust the sound levels to reflect one’s personal tastes.  “CONtent” is the more overtly musical side, marked by languid piano and light, reverberating electronics.  While listening in this manner, one can imagine an outdoor concert, the pianist set against a wooded field, unidentified creatures playing in the woods.  Fellow attendees speak in quiet tones.  The sound of rain, the smell of the leaves breaks through.  The sounds act in complement, save for the times in which they converge: the fifth minute, the twelfth, the halfway mark, the end.  At these points, the attention surges forward.  In the climactic minutes, synthesized crickets and agitated percussion produce a sound that seems like a liftoff. 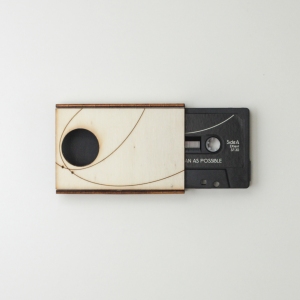 Now flip the script: field recordings and synth in the foreground, piano and electronics in the back.  At some point in the concert, an attendee wandered off into the woods. Perhaps he was chasing a firefly; perhaps he wanted to rest by the stream.  The new sonic world seems backwards, and wondrous.  He hears voices.  His isolation is soothing for a while, but then he begins to yearn for connection.  This is the point of the entire venture:  we need.  The name of production trio Human as Possible may imply artificial life and Turing tests, but the album implies a different angle: that human beings have become less human themselves, the victims of technology in an age of spiritual disconnection.  The engraved wooden cases are a tactile reminder of our roots: from nature we came, to nature we will return.  There is still time to act, to wander from our current path and in so doing to find our way.  (Richard Allen)